SALTED egg, a craze that has survived decades - from salted egg seafood dishes to salted egg yolk tarts, the rich flavour has seen it all. For The Golden Duck, its unconventional attempt at marrying the age-old flavour with an urban snack, potato chips, has found success.

The idea to produce such a product came on a whim to co-founders Chris Hwang and Jonathen Shen. The pair noticed that the "flavour spotlight" a few years ago was on Salted Egg Yolk, and wanted to give it a go.

"People were doing it in various interesting forms. So we thought that since it was the flavour of the moment, let's get on this and start something, and we just had the crazy idea of putting it onto potato chips," said Mr Hwang.

The Golden Duck is now known for being the leading player in the market for Salted Egg Yolk snacks.

The duo expected business to slow down as time passed, initially thinking that the flavour was just a passing trend, but two years did not slow things down one bit.

"It's been a whirlwind of a ride, because we expected this to slow down or even cap out, but it hasn't. It's been growing, not only in Singapore but overseas as well, and we are not done growing, " added Mr Hwang.

The snacks, launched in November 2015, are sold in more than 450 locations in Singapore, and have distributors in countries such as Hong Kong and the Philippines.

Though the business is now thriving, the road wasn't always smooth.

When they first started the company, the pair faced major staff shortage issues.

Mr Hwang and Mr Shen had to pull shifts in the kitchen, slicing potatoes by hand as they did not have machinery and delivering orders themselves.

"Everything, from the front to the back end of this business, was self-made," said Mr Hwang.

Last year's Chinese New Year was also one to be remembered, with the pair spending the second day of the celebration pulling an all-nighter in their factory.

"We come from families that practise visiting a lot, but we had to spend the second day in the factory due to the huge staff shortage, as most of the team members were Chinese and had taken the day off from work to celebrate, so we had to take over the work ourselves," said Mr Shen.

Launching in the prime of the Salted Egg fad, The Golden Duck faced many competitors with the same idea of riding the flavour wave.

"When we launched the product, I was terrified that we wouldn't sell, because of the competition we faced. Our price was high, and nobody knew about our product," said Mr Hwang, who dropped out of law school to pursue the venture.

Their doubts were cleared when they sold out within the first six hours of their operations.

"Singapore is one of the most competitive markets for food and beverage in South-east Asia, I would say. But we had something that was unique, we were the first ones to put a flavour that people have known for decades onto a snack," said Mr Shen.

The company took five months of research and preparation to perfect the product before it was launched.

Targeted at young adults, the snack was not really in the sight of the older generation until the business partnered with this year's National Day Parade (NDP).

Packets of The Golden Duck snacks were distributed in more than 100,000 NDP fun packs, and made their way into the hands of a new group of consumers.

"We really wanted to speak to that consumer group, because for those who have tried, they love it, but for those who have not, they don't know. So teaming up with NDP helped us put our product in the hands of every Singaporean," said Mr Hwang.

Even through all the challenges that they faced, the pair never thought of giving up on the venture.

The company has come a long way, from facing financial scares of going bankrupt, to making it onto Forbes' 2017 30 Under 30 Asia Retail and E-Commerce list.

But for Mr Shen, he described his highest point as the company's Christmas project last year, where they sent cartons to Singaporeans all over the world who couldn't come home for Christmas.

The cartons were filled with things that would remind them of home, ranging from local coffee and snacks to local reads.

"The amount of heartfelt messages we received was touching, some even moved me to tears. Personally, it meant a lot as it showed how big an impact we made on Singaporeans out of Singapore. For me, it will always be something that I strive to do with this product, bringing happiness to people," said Mr Shen.

"This business has always been about people, and first and foremost, consumers, what we can provide them and what we can make them feel. That campaign was very touching, and it was a defining moment for us, to make people happy by giving them a little piece of home," added Mr Hwang.

Speaking on future plans, the duo said that they are planning to focus on the markets they are already in, to stabilise their foothold.

The Golden Duck snacks are currently sold in over 400 7-11's, 15 Cold Storage's as well as with retail partners like Pasarbella.

The company also recently attained halal certification for its products. 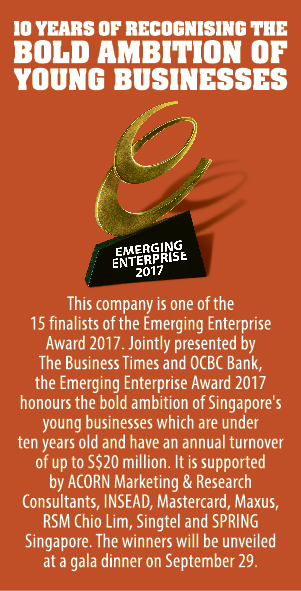 No price hike at some businesses this CNY