BEHIND the drawn metal doors of a nondescript factory at the northern tip of Singapore, A4-sized smart carts moved autonomously on small monorail tracks that could change tack on its own, while a robotic arm picked and placed items in its manufacturing base.

"It is the first of its kind," said managing director of Pixel Automation, Premarajan Ponnambath, a 31-year automation industry veteran.

"Traditionally, you expect these kinds of things to be coming from the US or Europe. So people are a bit sceptical - will this work or not? That's why we spent money to build (the prototype) to show people," he said.

The company, which designs and builds customised automation solutions for various industries, has developed the agile manufacturing solution with a system called PixCell (it rhymes with the company's name) and a decentralised transport system it named SmartMove.

The modular design of PixCell makes the system highly flexible, scalable and reconfigurable, with 70 per cent of the system being re-usable at the end of a product's life and thus reducing huge investments for new product lines.

Traditional manufacturing lines are rigid, as they are purpose-built for a certain product or process and cannot be re-used. Thus manufacturers have to shell out a hefty investment for a new line if it needs to produce new products, and a new customised line takes about six months to develop.

Its lean and green design means it consumes about 25 per cent less power as it uses 40 per cent less field wiring, controllers, stoppers and sensors, said Mr Ponnambath.

As for SmartMove, Internet of Things (IoT)-enabled carts are able to communicate with other carts and manufacturing cells, and navigate their way according to the product they are carrying. When the IoT carts reach a cell, the cell can take over the control of the carts.

The system is also equipped with data analytics to continuously monitor the health of the carts and alert when there are anomalies detected, allowing predictive maintenance of the system, said Mr Ponnambath.

What's interesting is that most of the parts can be mass produced, thus cutting the time needed to develop a new customised manufacturing line.

This revolutionary approach to automating manufacturing means firms can mass customise their products at a lower cost, said Mr Ponnambath, whose ultimate goal is to be the enabler of people-less, lights-off smart factories of the future.

The firm sees a need to innovate due to changing market trends.

Product life and time to market are becoming shorter; product complexity is increasing - firms have to produce variations of the same product; and firms are also looking at a shorter return of investment period, said Eena Tan, business development manager of Pixel Automation.

She noted that there are many software solutions available, but there was no hardware agile or flexible enough to facilitate it in the past.

She said: "Through feedback from customers, we understand the challenges that they are facing in the future. And this system will make it truly possible to do a 'lot size one'. So you can produce just one item in a batch, not just (through) the software, but also the hardware."

Besides large companies, this new system will also benefit SMEs, as they can run and switch different processes, such as assembly and inspection, on the same line easily within the same day, noted Ms Tan.

Mr Ponnambath, a former mechanical engineer, programmer and lecturer, founded the company in 2011, out of his passion for all things related to technology.

The company began by providing automated manufacturing systems to a multinational corporation (MNC) which manufactures ink cartridges. It strives to get itself onto the approved vendor list of a new MNC client each year as it grows its customer base.

Within four years, the firm has grown its client base and services, as well as acquired a new factory and expanded its engineering department.

Not one to mull over adversity, Mr Ponnambath huddled his team together during the lull period to brainstorm and work on new products to address market needs, as well as to develop new customers.

That was how PixCell and SmartMove were born.

He said: "We cannot quantify by number but I think what we have achieved in that two years is much more than what we have achieved in any other years in terms of business because we have expanded our product offering on our own and we have gotten two new customers. For us, it is not translated onto the balance sheet yet, but it was a very significant achievement for us in 2016."

It took a year to come out with the first prototype of the smart manufacturing system, which went through many refinements, he said.

The biggest hurdle during the journey lies in changing people's mindset in how they view things, he noted.

Mr Ponnambath said: "People have a very routine way of thinking. They always know that a conveyor that moves this way must be stopped.

"When I tell people that there are no stoppers or sensors - it is radical thinking. People thought it may not work. How do you make something stop without a stopper? Because they have been so familiar with a certain way of working, bringing in new things requires a paradigm shift."

The most challenging in terms of technology was in designing and developing the cart, he said.

"This cart needs to be very versatile, it has to be completely autonomous, and it can move by itself following a certain program or at a certain speed. At the same time, it has to go through many different traffic junctions," said Mr Ponnambath.

Nevertheless, the team managed to iron out the kinks and finally arrived at the current version, for which they filed for a patent in 2016. The patent is pending.

Now, the company is ready to commercialise the product and response from its current customers has been encouraging, said Mr Ponnambath.

The company is currently in talks with several local and overseas firms which are keen to adopt the smart system and some overseas MNCs are also interested to partner with the company to produce the system.

Although the fruit is now ripe for the picking, work on the next generation system has started. Mr Ponnambath aims to fortify it with better features like improved accuracy using vision camera, internal positioning system and space-saving features.

"When you have passion, you will find time and energy for it," he said. 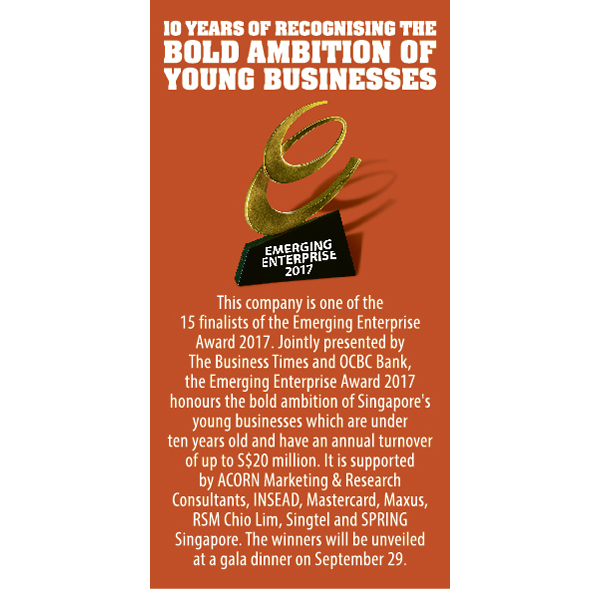