JUST gaming chairs? Not at Secretlab. The makers of the premium customisable leather chairs have seen success in their chairs with a diverse range of customers - not exclusively from the gaming community, but also from law firms, clinics and corporate offices.

Ian Ang and Alaric Choo got the idea to start the company in 2014, when Mr Ang faced difficulties finding a suitable chair for his new home.

"I had a gaming set-up ready, and I was trying to find a chair that would be comfortable for long hours of use and of high quality, but I couldn't find anything suitable. At that point, we thought this was something we could create ourselves," he said.

After speaking to a few people about their budding idea, the former competitive gamers decided to venture into the business.

Secretlab was launched in May 2015, initially running its business in Singapore only. Today, it has expanded to countries like US, Australia and Malaysia, and ships to over eight countries.

Though initially targeted at the gaming community, the chairs prove to be popular among other customers as well, with purchases made by law firms and clinics.

"Almost everyone has a desk job these days, and they spend more than six hours seated each day. And since our product was designed for long hours of usage, it is applicable to almost everyone, so the audience has definitely gone beyond just gamers," said Mr Choo.

The chairs' designs have also evolved along with the change in customer base, progressing from flashy chairs with bright racer stripes to more understated designs of black chairs with gold trimmings.

Mr Ang and Mr Choo started the company from a small space in custom gaming PC maker Aftershock's office, where they previously worked at. And that humble beginning inspired the name Secretlab.

"When we started out from a very small space in Aftershock, we were doing it secretly and no one knew we were coming up with something. Being so small and lacking many assets, we had only the element of surprise, so we thought Secretlab was a fitting name," said Mr Choo.

When Secretlab first started, Mr Ang was still an undergraduate, but he decided to drop out of university to pursue the business.

Funding was also a barrier to the startup, after their application for grants was met with one rejection after another. So the pair pumped their own savings into the company, funding the first eight months of production and development.

"During those eight months, we were living very frugally and watching all of our expenses. We had almost nothing left after investing all of our savings in the company," said Mr Ang.

Even after a successful production, it was a challenging period for both men who had no idea if they could make any sales.

"There was no guarantee that our product was going to be a big hit. Money that we put in was burnt very quickly, and so we had to be very careful with our spending as whatever money we made was reinvested into the company," added Mr Ang.

He and Mr Choo did not draw any salary for more than a year, spending what little they had on only basic necessities.

But the duo eventually succeeded, thanks to their philosophy of striking a balance between cost and quality.

"Creating something that is of high quality but with a fair price is important to us. It's very easy to make something high quality and super expensive, but it's challenging when you try to balance both," said Mr Choo.

The first line of chairs that was launched sold out within the first few weeks.

Speaking about his highest point in running the business, Mr Ang said: "Just an hour after we launched, we made our first organic sale.

"I'm usually a very composed person but at that point, it felt so exhilarating that I just couldn't stop grinning. Everything we worked for over the previous months, every obstacle we overcame, had led to fruition. It's my baby.

"To date, even when we get corporate orders for hundreds of chairs, it they still can't hold a candle to the euphoria of that first organic sale."

Secretlab has an office in Bendemeer where customers are welcomed try out the chairs before purchasing, but most of its business comes from its online platform.

"At Secretlab, one of the things we believe in is selling straight to the consumer, cutting out the middle man. We get to control the customer's experience, pre-sales as well post-sales," said Mr Ang.

"If we go through retailers, the consumer will end up paying more, so the savings we make from cutting out can be passed on to the customers."

While it started off with the Singapore market as its target, Secretlab now sees almost 80 per cent of its revenue from overseas purchases.

"If we had invested a lot of money into retail instead of focusing on our online platform, we would not have got as big as we did," said Mr Choo.

"If we had spent money getting a retail space instead of expanding overseas, which turned out to be pivotal for us, our growth would have been severely capped."

The company started its overseas venture with Malaysia in December of 2015. It will be launching its new expansion into UK and Europe tomorrow. 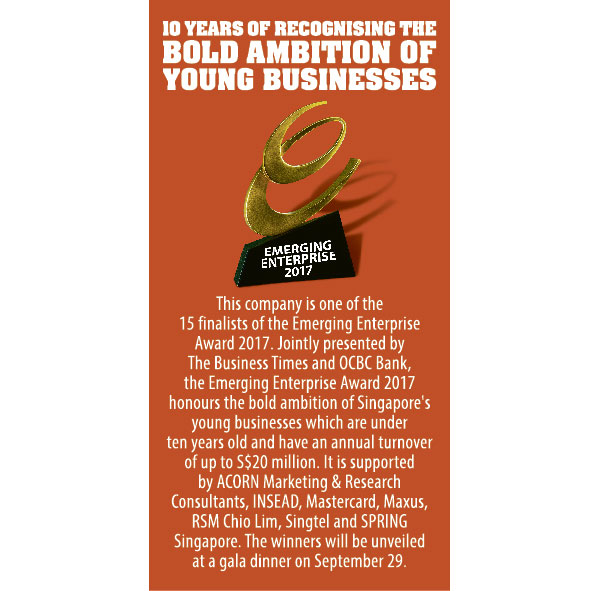