TRADITIONAL HR processes that use outdated technology such as punch cards and local drives can be time-consuming and tedious. Citing a personal example, Charles Liaw, 59, once had to travel all the way from his home in Tampines to Tuas during a weekend just to update the payroll data of one employee.

This decision was not without risks. The company was established in the midst of the Asian financial crisis and firms were less liberal with operational expenditures. However, as managing director, Mr Liaw remained optimistic and firmly believed in the opportunity he saw in the crisis.

"People are not willing to spend during these times, but if your product can improve productivity, is user-friendly and reasonably priced, they will still be willing to make the investment," he said.

Based on this, and a 30-day money-back guarantee, Times Software gained its first 50 customers within six months.

By then, a second world crisis known as the Y2K, or Millennium bug, was approaching. The problem was expected to create havoc at the turn of the millennium and cause many data-related issues in older computer systems. As a result, companies worldwide had to upgrade their computer systems and software. Many viewed the Millennium bug as a crisis, but Mr Liaw saw it as a golden opportunity to sell Times Software's products which were Y2K-ready.

"When we build our software, we consider it from the user's point of view, whether a manager or a chief executive, because at the end of the day, the software needs to make the company more efficient and help the company control its costs more effectively," said Mr Liaw.

Today, it supports more than 7,500 clients in 10 countries spanning a diverse range of industries.

"For a company to grow, you must have capable employees. Their talents and skills are essential assets to the company," said Mr Liaw.

Times Software believes having good human capital is one of the biggest contributing factors to its success. It holds regular training and skills upgrading sessions for its employees to ensure that they are always well-equipped to stay ahead of the industry curve.

It adopts the Kaizen philosophy, a Japanese management concept, to help it improve its employee productivity in the long term.

"Kaizen means 'constant, continuous improvement'. We incorporate the concept into our company to motivate our employees to be flexible and to consistently improve themselves," said Mr Liaw.

The philosophy is imbued in the company's internal communications system, a platform that allows its employees to share their knowledge and ideas about the company with one another so that continual improvement learning can take place. Times Software believes this has helped its employees excel in their roles.

A second factor of Times Software's success is its commitment to customer service.

It is inevitable that software that serves the same purpose will have similar features, so Mr Liaw believes customer service becomes an important differentiator.

The company believes the strong word-of-mouth advertising by its customers serves as a testament to the quality products and service it is providing. In fact, Times Software boasts a customer retention rate that ranges between 99 and 100 per cent annually.

Finally, Times Software attributes to its success, its efforts to anticipate change and stay relevant. It continually engages in research to incorporate the latest technologies into its products. It has a team of developers in Singapore and an overseas development office collaborating on current and changing system requirements.

It also actively seeks feedback from its customers through various channels such as e-mails, feedback forms and phone calls. The company then incorporates the new requirements and sophisticated needs of its customers into its products.

Times Software believes these strategies have helped it gain a competitive edge by enabling it to respond promptly to current market demands.

Prepared for the future economy

In the next few years, Times Software expects to see the continued growth of Cloud Computing as the market continues to embrace the Software-as-a-Service (SaaS) subscription model, which is more cost effective than the traditional full licence model.

Times Software introduced its SaaS subscription model two years ago when Cloud Computing was still starting out and it is equipped to ride this trend for the next few years.

Looking further ahead, Times Software also anticipates Artificial Intelligence (AI) to play an increasingly important role in HR functions in the next five to 10 years as the technology matures.

"Employee recruitment processes will become fully automated when AI can be deployed to assist the selection and sorting of candidates for job interviews. AI might also be used in scheduling duty rosters to reduce the workload of department heads," said Mr Liaw.

Mr Liaw said: "We currently have a presence in markets such as Malaysia, Hong Kong, Dubai, Thailand, Brunei, Indonesia and the Maldives. Our goal in the long term is to expand across the Asia-Pacific region, but first we need to gain a foothold in South-east Asia."

Currently, it is looking to expand into Myanmar and Laos by partnering local software distributors. It believes this is the best expansion strategy as overseas set-up costs are very high.

Back home, Times Software expects that the Singapore government's Smart Nation initiative will help them grow their business as it encourages companies to automate their HR processes.

"The Smart Nation initiative is definitely a welcome move. We will continue to focus on making clients' productivity our top priority," said Mr Liaw.

"We will also continue to ensure that our software products remain cutting-edge. The future definitely looks promising." 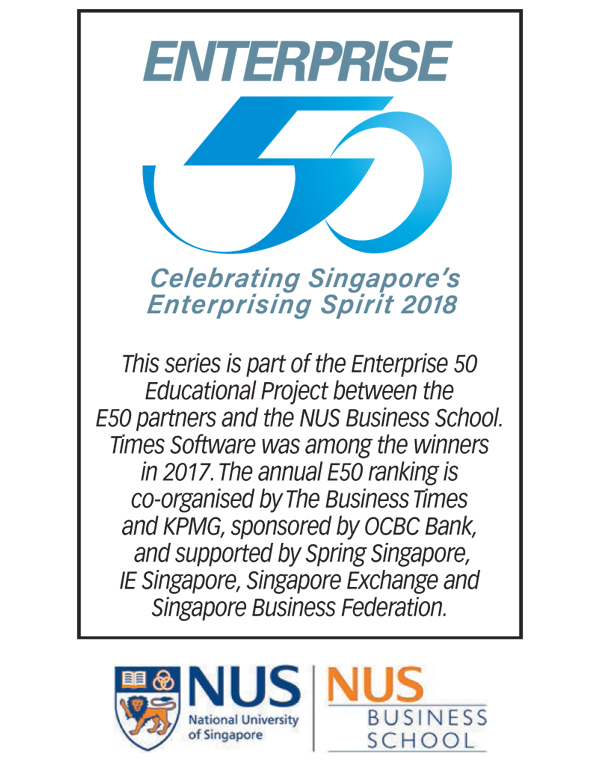 Singapore-based entrepreneur and CEO, Henri Bong shares his entrepreneurial journey and how diversity of culture and experience has led to the...

Fuelling the growth of local SMEs: From going digital to going global with e-commerce

Storming her way ahead

A few years ago, Debbie Lee was headhunted for not one but two high flying jobs. She turned them down. Her friends thought she was crazy, but Ms...