KANGAROOS may soon be hopping into the heartlands armed with sensors and artificial intelligence (AI). At least, that's the kind of future that education technology firm Taidii hopes to realise.

The kangaroos - a "social robot" built for human interaction - will greatly improve productivity in pre-schools in Singapore, says the firm's co-founder and chief executive Wang Bin in an interview with The Business Times.

That is because the robot can automate daily administrative tasks, such as the temperature- and attendance- taking of the children in the morning via its suite of sensors, that would ordinarily be done by a teacher.

"Our first version was like a gantry in the airport," says Mr Wang. "This latest version we have is shaped like a kangaroo so that we can do interaction with the children more intuitively."

Once the data has been collected, the robot sends the results to the firm's cloud computing platform, where a report will automatically be produced for archival and compliance purposes.

In addition to the robot, Taidii has developed a suite of systems designed to reduce teachers' administrative work in areas such as curriculum planning, student assessments, staff deployment and training, and parent-teacher communication.

Those systems are more than just moving from pen and paper to smartphones and tablets, says Mr Wang, as working habits would remain similar.

"Our vision is to free teachers from admin work through AI and automation so they can have more time to care for the children."

But that vision only came about after a chance visit from government officials to the National University of Singapore's (NUS) Social Robotics Lab in 2012, where Mr Wang was in his final year of post-graduate studies in electrical and computer engineering.

The officials were keen to reduce the "pain points" of pre-school operators here, says Mr Wang. One of these being the collection and compilation of children's temperature and attendance records by teachers.

"So they asked us, since we are doing robots, can we do a robot to automate such a process so that schools don't need a teacher to do it? So we did."

Once the robot was built, the team realised the technology could be commercialised.

Mr Wang founded Taidii in 2013 after his studies at NUS, along with Ge Shuzhi, a professor at NUS' Department of Electrical and Computer Engineering and director of the Social Robotics Lab, and venture capitalist Michael Yap, a former deputy chief executive of the then-Media Development Authority.

The firm started with a pilot of four pre-school centres and has expanded to more than a third of pre-schools here, along with more than 130 in Malaysia and the Philippines, and 316 in China.

A big part of the firm's growth can be attributed to the government's Smart Solutions initiative for the early childhood education sector, says Mr Wang. Under the initiative, pre-school operators can tap on grants to reduce the cost of adoption of technology that firms like Taidii provide.

It charges pre-school operators an average of S$400 to S$600 per school on a monthly basis for its suite of services. This translates to a "few million dollars" in topline earnings, says Mr Wang, though he declines to reveal the full amount.

Revenue has grown by a factor of 10 since 2014, he adds, noting that Taidii is on track to double its earnings this year due to strong demand from the Chinese market. The firm is also in the black as it is at a "steady state" in the local market.

"Singapore pre-schools are well recognised in China; our technology has been proven; and we have confidence because of the huge potential in China," says Mr Wang.

To aid in its expansion, Taidii has raised a S$2.2 million investment round in recent months and has plans to raise another S$5 million sometime this year. To date, the firm has raised more than S$3 million.

Key products in the pipeline include a new version of its AI engine for curriculum planning, where lesson plans can be automatically tailored for the individual child based on the child's assessments and teacher feedback, says Mr Wang.

But the firm's bestselling service is still its original product: the robot. "It is very rewarding, because it has become a habit for the young children to hug my robot and say hello first thing in the morning." 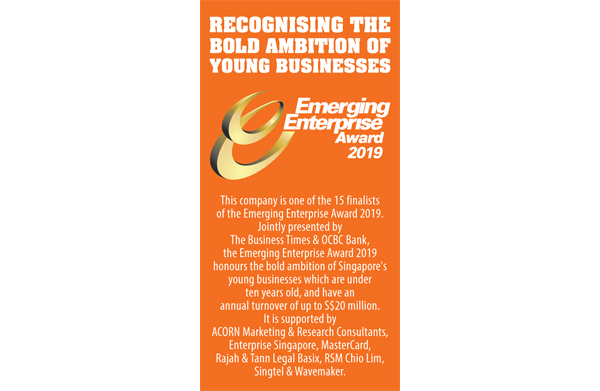 HIGHER unemployment is a symptom of Singapore's worst recession since its independence - but all those dour numbers have not deterred home buyers...

PROPERTY developers, investors and businesses have offered several suggestions for Jurong Lake District, which is set to provide over 100,000 new...