YOU can say, but do you do; is a question that Rodney Cheong, 49, says guides his approach to running his family's architectural supplies business.

The 49-year-old CEO and managing director of Seiko Architectural Wall Systems sees professional reputation as the key to long-term success. To him that means being committed and able to deliver on what you promise.

After more than two decades with the firm, and 17 years running the business, he says he has seen many people who make great promises during job interviews but end up putting in a performance which is "worlds apart".

Founded 40 years ago, Seiko Architectural Wall Systems has evolved and expanded from a specialist glass supplier to offer services in the design, manufacture and installation of a wide range of building façade components for the construction industry.

Mr Cheong joined the company, co-founded by his family, in 1994 after graduating with an honours degree in electrical engineering, becoming MD in 2001. He says he is very much "a project man" and takes a hands-on role in all aspects.

It's a commitment to the business that means he works every day of the week, barely finding time for his family which he usually sees only on Saturday nights and Sundays when he dines with them. Nonetheless, he says, his family are unwavering in their support - especially his wife and father - and this is what drives him.

One of his few breaks from work is a regular jog he takes most Saturday evenings to maintain his fitness level and prepare his mind for the week ahead.

He says that Seiko's competitive advantage over other players in the industry comes down to its reputation, backed up in large part by a core team of committed long-term staff.

Most of the firm's key service management personnel, for example, have been with the company for more than a decade.

Mr Cheong believes that retaining key staff helps underpin the company's culture, yet he is also mindful of the importance of recruiting new talent for succession planning and taking the business into the future.

Another significant factor he says places Seiko above others in the business is the high degree of vertical integration in the firm's product offerings.

That means the company is able to offer a one-stop-shop service, from drawing board design work, through production and testing, to the final installation of the finished product in the building the client is working on.

"From the moment raw materials enter the company, we do almost everything ourselves," he says, pointing to the firm's design offices in Singapore and Shanghai, production plants in Singapore and Malaysia, and its own teams of workers deployed on-site at construction projects to oversee the installation of its products.

In a highly competitive industry Mr Cheong says Seiko differentiates itself from rival firms by providing a higher standard of service. That means bringing a professionalism to every project it works on, anticipating and understanding the client's needs at every stage.

Seiko's business philosophy, he says, "is with brain, not without".

The combination of hard-won reputation, committed staff and a vertically integrated, one-stop shop has served Seiko well as it enters its fourth decade of operations. Mr Cheong says the firm has made a strong name for itself as a specialist, professional contractor known for taking on architecturally adventurous projects.

Rather than run-of-the-mill standard building designs, the past decade in particular has seen it taking on a growing number of more technically challenging and innovative projects which require the complex curtain wall systems.

Notable projects the company has worked on include Changi Airport's Crowne Plaza Hotel, the Carlton Hotel in Bras Basah Road, and The Light @ Cairnhill condominium.

Mr Cheong says Seiko's technical expertise and experience has made it one of the industry's leading names in complex construction façade engineering projects. In 2017 the company won the Singapore Enterprise 50 Award for an eighth consecutive year.

As the company continues to grow, it has leveraged on lower operating and production costs to venture beyond Singapore, opening subsidiaries and offices in Malaysia and China.

With its reputation spreading overseas, Mr Cheong says he has been receiving calls from prospective clients and partners from around the world. However, for the moment, he is cautious about international expansion given the recent trade barriers imposed by the United States and the resulting knock-on effects on international trade.

Nonetheless he acknowledges reputation alone is not a guarantee of a sustainable business - it is something that must be continually worked on, enhanced and upgraded. That means keeping up with rapid changes in technology, absorbing and anticipating new trends and always staying ahead of the industry.

"A business model does not serve you forever," he says. "It has an expiry date to it. We must be forward-looking and look for business opportunities". 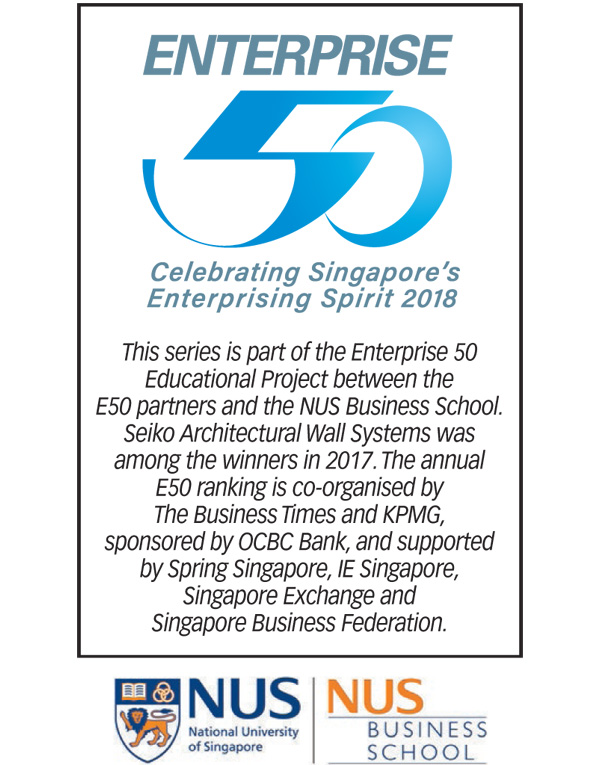 IN an era where Singaporeans can't get enough of online shopping, the automobile industry has managed to fight off the trend of digitalisation....

AS the Covid-19 pandemic continues to rage around the globe, local small and medium-sized enterprises (SMEs) are meeting demand for diagnosis,...

FOR a chief executive officer of an event producer, Leslie Ong is unusually positive. By a stroke of good fortune, Mr Ong's firm UnUsUaL Ltd was...