Recalling the horrific incident that happened that April in Kathmandu, the founder and creative director of Paper Carpenter told The Business Times in a recent interview: "Life is so fragile. We are just like mosquitoes - a smack and that's it, you're gone."

He was in the Nepalese capital with a friend and they wanted to "do something crazy", so they decided to climb the Himalayas.

The day before the earthquake is a happy memory etched in Mr Chua's mind. He had met some French nationals whom he connected with instantly. They stayed at the same guest house and were getting ready to climb Mount Everest together the following day.

And suddenly, Mother Nature's wrath struck that fateful day, killing some 9,000 people and injuring 22,000 others.

"The whole floor was like a viking ship ride. Everything toppled. My friend told me to get out immediately. I didn't realise it was an earthquake and stepped out just in time.

"The building collapsed in front of me. Everything got buried in seconds. The few children who were learning swimming got buried there as well," said Mr Chua, adding that there were 10 to 20 aftershocks within a day and the death toll kept climbing.

That experience not only made him realise the transience of life but it was also what inspired him to start the cardboard design agency's newest creation, PaperConnect.

The PaperConnect system was developed after a business partner left his firm. Mr Chua decided to take it further with his wife, Irene Ng, who is the marketing director of Paper Carpenter and holds 49 per cent shareholding in the company. Mr Chua owns the remaining 51 per cent.

PaperConnect works similarly to Lego blocks, in which users can join square cardboard bars 2.3 metres in length using a connector made from plastic to form anything, from pen holders to furniture, and even caskets.

The company follows a pallets-on-demand concept, and according to Mr Chua, it takes less than 2 minutes for two people to form a four-way paper pallet that can withstand up to 2 tonnes of weight.

It was also the earthquake that got him thinking of making caskets out of a different material other than wood, which is diminishing in supply.

In Nepal, Mr Chua observed that the dead were clumsily wrapped in blankets that hardly offered proper support. Moreover, the inaccessibility of areas like mountains meant that helicopters had to lift bodies, a process that is cumbersome.

"I thought then that there should be some solutions to transport caskets. And it's also fine for those who wish to be buried there as cardboard is biodegradable."

When he came back to Singapore, he got in touch with the Nepalese authorities, offering to supply them cardboard caskets, but they didn't respond to him.

Mr Chua said the firm was approached by agents supporting the Red Cross, to supply caskets made out of his PaperConnect system to Laos after a dam under construction collapsed in July, causing flash floods.

"We hope with our technology, we can replace wooden crates. We have started pushing out a few samples and they work great," he added.

"It saves cost, is light, has no disposal problem, and recyclable anywhere."

The caskets aren't just for human bodies. Mr Chua once received a request from his friend to build a casket for his pet.

Other than caskets, Mr Chua has also had a military officer approach him to use cardboard to replace fibreglass for target practice.

Paper Carpenter, founded in 2013, started out using corrugated boards, and wood was inserted into the material to support internal structures. But it has since eradicated the use of wood and is now using pure cardboard.

Madam Ng said it took two years of research to develop the material to ensure that it can support heavy weights, and to find the right chemicals to make it fire- and water-resistant. Paper Carpenter worked with an Australian lab to develop a fully biodegradable nano-coat, a special fluid that coats the molecular fibres of the material, giving the product a smooth finish with "no waxy feeling".

A square bar 2.3 metres in length is priced at S$12. According to Mr Chua, who has nine other workers with him, the company charges 35 per cent more for the coating to be applied.

The cardboard is manufactured in China, where Paper Carpenter's main factory is. Mr Chua said he is considering operating a factory in Thailand where production facilities are cheaper.

In Singapore, the firm's office, warehouse and factory are housed in a 1,900 sq ft space at New Industrial Road.

In fiscal 2017, Paper Carpenter recorded S$900,000 worth of sales, and gross profit was half of that. Ms Ng said the firm has been profitable for the last three years.

The company incurred a one-time "high cost" of S$300,000 relating to research and development ast year, but Mr Chua said "we'll be a lot healthier this year onwards".

Some of the larger-scale projects the firm has taken on include designing an exhibition booth at Gardens By The Bay and 3D architectural models of Singapore's iconic landmarks for Changi Airport.

Mr Chua said he has received enquiries from parties in the US that were interested to be his distributors. Other than the US, Paper Carpenter has also expanded its footprint to countries including Europe, Russia, China, Thailand, Japan, and Malaysia.

The firm is setting its sights on the logistics sector, where wooden crates seem to be the only option now.

"A lot of partners are talking to us for an alternative solution. In terms of having this as a customisable solution, it's gaining quite a lot of traction in Singapore. Singapore itself is quite a big logistics hub," said Madam Ng. 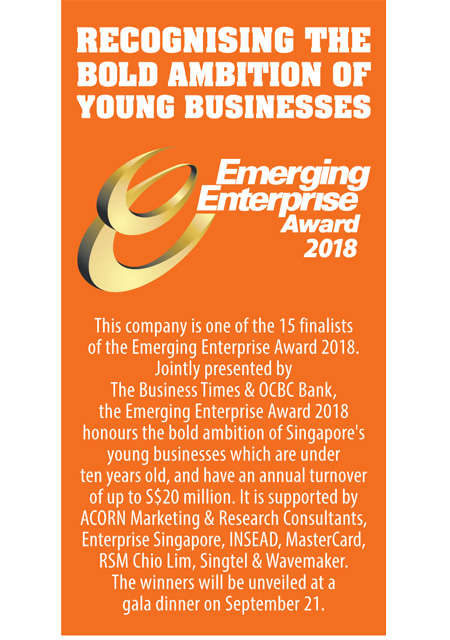