THE impact of factory closures and cuts to transport links across China will have more far-reaching implications for businesses compared with the Severe Acute Respiratory Syndrome (Sars) epidemic of 2003, say market watchers, even as they stress that there are still too many questions surrounding the novel coronavirus outbreak.

"Many companies have business continuity plans but very few of those plans include scenarios for an entire national supply chain shortage," said John Macpherson, partner and head of crisis and security consulting in Asia Pacific and Control Risks.

There is also an issue of timelines.

"Most of our clients are very used to managing crises but they tend to be over within a number of days or weeks," said Mr Macpherson.

"It's unusual to have a crisis that extends for weeks and months. And this is something companies will have to manage very actively at least for a month if not longer."

Shutting down of the "factory of the world" unsurprisingly has far-reaching effects.

"Global textiles and electronics sectors should be most vulnerable to a disruption in the Chinese supply chain. Taiwan, South Korea and Vietnam would be hit the hardest, either in the form of a delay of downstream production or a shortage of upstream raw materials supply," she said.

Closures of transport links has also exacerbated the situation. Hubei province is not only one of China's manufacturing hubs, it is also a transport hub.

Logistics companies BT spoke to said they are working within local conditions and restrictions. A Fedex spokesman noted that work and travel restrictions "may affect shipments inbound and outbound to/from Wuhan and other impacted cities within Hubei Province, as well as shipments moving within those cities".

A DHL spokesman said its pick-up, delivery and warehousing services in Hubei province are currently suspended. The local government in Hubei has, among other things, cancelled commercial flights to and from the city of Wuhan, as well as closed all highways and roads into Wuhan. Additional controls and movement restrictions have been imposed by authorities in other provinces and cities as well and these may be expanded in the coming days.

Maybank Kim Eng's senior economist Chua Hak Bin meanwhile noted that China's role in the global supply chain is much greater today compared to 2003. "And of course, China's economy wasn't as big and it was less well connected then," said Mr Chua. "So the effect (today) will be magnified and we will see the full brunt of the impact in Q1." 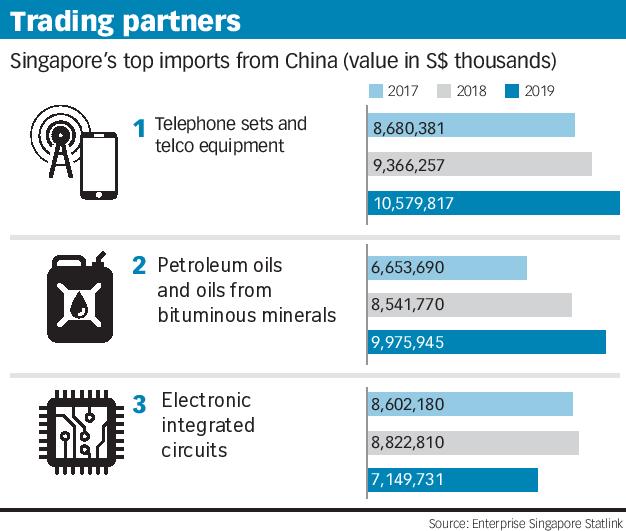 Looking at countries in the region, Maybank Kim Eng said Singapore and Thailand will likely be most impacted and could see some growth downgrades. Other Asean countries including Malaysia and Vietnam will see a small impact, while Indonesia and the Philippines are seen to be least hit.

Selena Ling, OCBC Bank's head of treasury research and strategy said in a note that while it is still early days for estimating the economic impact of the outbreak, Singapore's GDP growth could potentially be shaved by up to 0.5 to 1 per cent point from the baseline if the current epidemic lasts more than three to six months.

DBS has already downgraded expectations for Singapore's GDP growth. "Headline GDP is expected to contract by about 0.6-0.8 per cent year-on-year in Q1... about twice as deep as the Sars outbreak," said DBS senior economist Irvin Seah in a note. He lowered Singapore's full year GDP forecast to 0.9 per cent, down from 1.4 per cent previously.

While tourism, hospitality and retail sectors have already been flagged as sectors that will be most affected, the fallout will be felt across many other sectors said Kent Kedl, partner and head of Greater China and North Asia at Control Risks.

"Wuhan is of course known for heavy industry, some light industry and the automotive industry is very strong there. But we're seeing a real problem all over China. Here in Shanghai, the discussion among business leaders is when they can open their factories again."

Mr Kedl, who is based in Shanghai, noted that businesses face too many unknowns.

It does not help that employees have been travelling back home for the Chinese New Year period.

Many employees are still in the dark as to whether there will be an extension of the Lunar New Year holiday, whether or not they need to be quarantined, and where the quarantine will take place.

Control Risks said in a note that it expects the type of restrictions already present in China to be extended in scope and last for several weeks (at least into March).

"In a baseline scenario, there will be a very significant impact on China's first quarter and probably second quarter growth, and some major sectors such as tourism and transport will clearly be affected globally."

IT Show among major events postponed

Shipping must be prepared for wider spread of virus

COMFORTDELGRO Taxi will halve taxi rents for June as Singapore starts Phase One of its reopening plan.

A positive mindset is key to seizing opportunities from reskilling programmes

THE disruption caused by the Covid-19 pandemic could boost employers' willingness to consider unconventional employment formats - including taking...

Resumption of business activities from June 2

Singapore exits the eight-week Circuit Breaker period when it ends on June 1, with the country resuming activities safely in three phases.