EACH time a customer makes a purchase based on personalised options offered by a tech-based aggregator service, the heat is cranked up a little more on traditional companies that haven't yet adopted personalised marketing.

Netflix fans would know that the platform is able to suggest new television series for them to follow, based on what they have been watching. Getting such recommendations generated by an algorithm is the new normal for consumers - and this is causing a shift in power to companies that control the point of discovery.

For instance, a hotel booking aggregator site can command higher commissions when hotels become more dependent on it to help them generate business.

Crayon Data, a big data and artificial intelligence (AI) startup, is another example of a company that controls the point of discovery. Its mission is to help businesses regain control in the marketing arena, using its maya.ai engine to target customers with information the companies already hold.

The engine crunches data from a client's customer base to produce a personalised "storefront" and taste profile based on the customer's likely preferences. It can do so in as little as a week. Crayon Data's clients can then use such a profile to personalise marketing to these customers.

Personalisation is relevant to every industry, but Crayon Data targets lifestyle-related businesses, which includes banks, airlines, retailers and telcos. These all have millions of customers and their transaction data, but lack the ability to leverage those assets.

Suresh Shankar, Crayon Data's founder and chief executive, said: "Traditional enterprises are like a frog in boiling water. Their business is being eaten alive by digital disruptors and they are not able to respond fast enough.

"Today, customers want to be celebrated for their individuality. I've had credit cards from one bank for 19 years - and it still sends me offers to steak restaurants. By now, it should have figured out that I'm vegetarian."

Companies like Spotify and Netflix, which excel at personalisation, have spent heavily to build their capabilities.

Crayon Data has come up with a single straightforward solution to accelerate adoption of AI-led personalisation among less tech-savvy businesses.

The focus on simplicity is deeply embedded in the company's culture, starting from its very name.

Mr Shankar said: "A crayon is simple. A child can use it, there's no instruction manual. It tells colourful stories and everybody can understand the picture that it paints, because it's a very simple image. That's what data and AI should be.

"My engineering and technology folks hate me. They say: 'You think it's simple!' And that's the point. I know it's not simple, but what we are doing in Crayon is taking all this complexity and putting it under the hood.

"As a client, you press a button and you get this. As a consumer, you say: 'Whoa, how did the company know all this about me?'"

Naturally, the business of personalisation wades into the dangerous waters of data privacy and security. It is practically impossible to enjoy both personalisation and privacy, but Crayon aims to strike a balance by working only with a customer's behaviours to deduce preferences.

The customer's identity is encrypted and anonymised so that the taste profiles can only be matched to individuals using the system and a secret "key" held by the client.

These and other data security safeguards are critical, given that regulators have started to clamp down on data misuse and poor security.

Crayon Data adds another layer of security by using reputable cloud systems such as Microsoft's Azure and Amazon Web Services, rather than its clients' own data centres, which could be vulnerable to hacking.

Crayon Data is clearly doing something right. Over the past two years, its revenue has trebled to just short of eight figures in Singapore dollars. It has a positive cash flow and Ebitda (earnings before interest, tax, depreciation and amortisation), like it did in 2018, but is choosing to invest in its growth this year.

Crayon's competition is mainly indirect - from companies offering only parts of its suite of solutions; Mr Shankar believes Crayon's advantage lies in its providing an end-to-end solution.

"They are all selling a capability, which is horizontal; we are selling a vertical solution. The time taken to go and buy data, buy that analytics capability, build the models, link it to a marketing execution system, create a digital presence - that is, do the integration of all of this - is enormous."

To boost customer convenience and follow-through once the personalised marketing strategy is implemented, Crayon's next step is to create partnerships and ecosystems that would enable a bank, for instance, to not just recommend a travel destination to customers, but to also suggest hotels, flights and the transportation needed for the trip.

Crayon operates largely in the Asia-Pacific and the Middle East for now, and is weighing five options for its next big expansion: Australia and New Zealand, the US, Europe, China or Japan.

But even as it deliberates, it is entering the Series B stage - a bridge round of funding with its current investors, which will be followed by a bigger round later to fuel entry into new markets and new verticals, and to develop new products.

Mr Shankar said the company has not had to raise money aggressively. It has run mostly on revenue so far.

"We are focusing on the annual revenue run rate, or total contract value, and signing longer-term contracts with bigger, larger companies.

"The reason we want to do that is that when we go and raise money, we are raising money from a position of strength."

When Crayon does raise that money, Mr Shankar hopes the numbers do not overshadow the hard work his team is doing behind the scenes.

"A lot of media coverage makes entrepreneurship and startups look much easier than they actually are. Someone raises a billion dollars, and the view would be that the company is growing. Obviously, that's the headline news. Underneath, there's a lot of complexity that would have happened."

In Crayon's case, the first few years were spent working on the algorithm. Then it had to convince clients about how this could add value for them and persuade them to get on board.

Now that the solution has achieved product market fit, more clients are starting to stream in. Crayon's single biggest priority now is to get its story out globally.

Mr Shankar believes Crayon will grow explosively as companies get comfortable with using cloud platforms; he is excited to have partnered Microsoft as a Managed IP CoSell Partner, which means Crayon can reach Microsoft Azure's enterprise users.

"Two years ago, I had to go to companies and say: 'Cloud is good, Azure is good.' I had to do the selling to convince them to come to the cloud. Now that problem is taken away, because now the cloud is being sold by Microsoft." 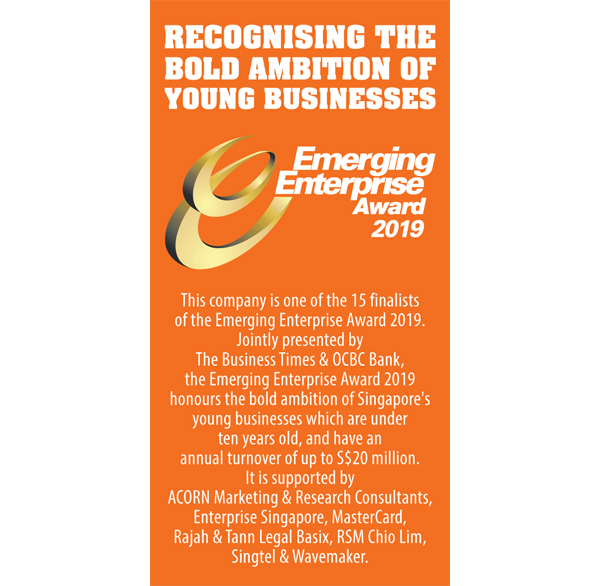