WITH most consumers here unlikely to park more than S$20,000 in digital banks, and an expected high burn-rate for new entrants to nab credit-card users, the incumbent banks' earnings are not at imminent risk with the eventual launch of digital banks, a CGS-CIMB report showed.

CGS-CIMB estimated that just 4-11 per cent of deposits from the entire domestic banking unit are at risk of being taken from incumbent banks, and absorbed by new digital banks in Singapore. But this simulation does not take into account "retaliatory measures" by incumbent banks and the effects of further Fed rate cuts, the brokerage said.

The grab for deposits is a key factor in moving the needle for digital banks, as digital full bank applicants are gunning for the cheap retail deposits that incumbents banks now access for funding needs.

The brokerage also surveyed 139 respondents from various industries, with a larger proportion of them from the finance industry. Those aged between 30 years and 50 years made up 75 per cent of the sample pool. 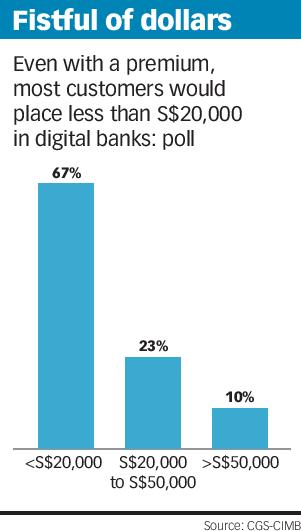 The Monetary Authority of Singapore, in setting out requirements for digital banks here, had made clear that digital bank applicants cannot engage in predatory pricing behaviour, and must show a path towards profitability in their five-year financial projections.

More customers may be willing to park money with Singtel than Grab. In offering another 30 basis points (bps) on top of market rates, given the digital bank's need to attract deposits, 45 per cent of the respondents were willing to place fixed deposits with Singtel, compared with just 33 per cent for Grab.

Testing for depositors' sensitivities to interest rates with an additional 50 bps premium over the rates offered by the digital banks above, 55 per cent of those who were previously unwilling to place fixed deposits with Singtel would now in this case, compared to just 40 per cent for Grab, the brokerage said.

"We noted a clear difference in the trust levels accorded to Singtel and Grab, based on their willingness to use these entities as a depository institution given an identical set of circumstances," said CGS-CIMB analyst Andrea Choong in the report.

"We are convinced that the ownership composition of digital banks - whether government-linked or of conventional banking parentage - could be a key factor in ramping up on growth, even more so than from the advent of higher interest rates."

The CGS-CIMB poll also showed that the bulk of respondents were not interested in using a credit card from the next digital bank unless the rewards offered were superior to current offerings. Roughly S$360 million in credit card fees could be taken away from incumbent banks in Singapore, which may be less sizeable than it seems as both Singapore and foreign banks in the retail space are broadly threatened with a loss in market share.

"The results also reinforce the fact that Singapore is a highly banked community, and hint at the potential burn rate of new banks competing in this space," CGS-CIMB said.

The brokerage referenced South Korea's Kakao Bank that, to be clear, succeeds in part as it does not have to cater to the underserved segment and meet defined profitability projections, as Singapore digital banks will have to do. Still, setting aside regulatory differences, Kakao Bank has gained from being able to tap Kakao-Talk's 44 million South Korean monthly average users, suggesting that a successful digital bank must integrate banking services into an existing business ecosystem, it said.

"We count only a handful of technology or e-commerce players in Singapore with that breadth of scale," the report said. "The successful integration of a full-fledged financial service platform into the newcomer's current operations could be a more compelling tale, albeit in the longer term."

The brokerage added that DBS, OCBC and UOB have ramped up on their digital spending in recent years, building application programming interfaces for a more seamless integration with third-party developers, lower costs, and to improve services.

DBS and UOB have launched standalone digital banks in the region, and CGS-CIMB "strongly believes" that OCBC will be part of a consortium bidding for the digital banking licence.

DBS outperforms in Q4; hunkers down to tackle impact from virus outbreak

IN RECENT weeks, the Covid-19 spread has left a sizeable dent in sentiment as investors worry about the economic repercussions brought about by...

CHINA pledged to roll out more effective stimulus measures despite a widening fiscal gap as the novel coronavirus hits an already slowing economy...

IN A sneak preview of what are going to be unveiled at the upcoming Budget to counter the adverse economic impact from the coronavirus outbreak,...