IT is not every day that a team of young university graduates reject lucrative job offers from top multinational companies to start up their own company.

And it is even more uncommon given that the startup bears little relevance to the graduates' fields of study.

But FOMO Pay co-founders Zack Yang and Louis Liu, who were engineering students, believe that creating their fintech startup was the right choice to make.

"We are young and not married, so we want to follow our heart, and try a different journey. More importantly, we believe we are doing something meaningful, which is enabling financial inclusion and cashless lifestyles," said Mr Liu, who is also the chief executive officer of FOMO Pay.

The startup, which was founded in 2015, is a one-stop mobile payment aggregator that helps merchants connect - both offline and online - to different mobile wallets and credit cards.

Today, the company has partnered with over 10 mobile wallets in Singapore, including WeChat Pay, GrabPay and NetsPay.

Several thousand merchants here are users of their solutions, from ComfortDelGro to The Fullerton Hotel.

Last year, the three-year-old startup achieved a seven-digit revenue, a year-on-year increase of more than 80 per cent, said FOMO Pay.

The company is also one of the few startups in the SGQR Taskforce, co-led by Monetary Authority Of Singapore (MAS) and Info-communications Media Development Authority to develop a common QR code for Singapore.

Back in 2015, Mr Liu said they realised that there was a pain point for merchants when many different mobile wallets, notably from tech giants, were launched.

"On the one hand, it was good for the market, as more competition meant that transaction costs got lower and lower. On the other hand, it was getting very troublesome for the merchant to accept so many digital wallets," he added.

"They are all using QR codes, but they are not interoperable."

This also meant that cashiers were running out of space to put up the different QR code stickers at the payment counters, he said.

And yet, Mr Liu said that even more companies, particularly financial institutions and telcos, continued to launch their own mobile wallets because of a phenomenon he dubbed as the "FOMO syndrome".

"They just see companies from other industries trying to disrupt their industry - they feel threatened, they feel nervous," he said.

At that time, the founders - who were earning licensing fees from a software they previously developed - found that it was very difficult to collect money from clients, especially those from India and China. They were using different digital wallets rather than credit cards.

"We realised we could find the solution ourselves, and it is also highly sought after," said Mr Liu. Despite the founders' non-financial backgrounds, he believed it was an advantage as they can think out of the box.

With that in mind, the founders established and named the startup as FOMO Pay.

At the start, Mr Liu admitted it was difficult to attract and educate merchants about their solutions because mobile wallets were so new, but soon a few realised its potential.

One of the first merchants that came on board was local telco StarHub. With the aid of FOMO Pay's solutions, Chinese tourists who do not use MasterCard or Visa could top up their pre-paid cards on StarHub's online platforms using their mobile wallets.

Another happened earlier this year, when the startup became a licensed financial institution under the MAS.

And as more merchants came on board, the startup also began to provide value-added services, like customer insights, he added.

On top of facilitating mobile payments, FOMO Pay is able to provide additional details to merchants on certain customer behaviours, such as the timing and location of the purchase.

Of the future, Mr Liu said that they will be looking to expand to other South-east Asia countries, as well as focus more on such value-added services.

The company is excited to be part of the journey to make a cashless society a reality, he added.

"When we see our solutions being used by merchants in Singapore, such as by Changi Airport and Marina Bay Sands, we feel we are making a difference. And that sense of achievement keeps us going." 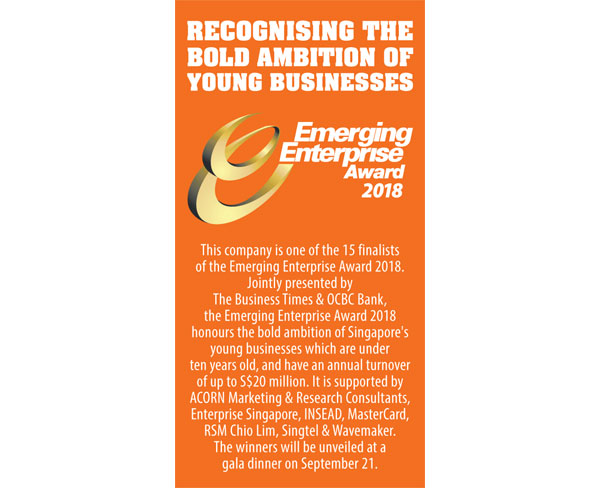 Sales tripled in November from a year ago - and it is not alone in its growth.

Redefining Data Security for SMEs in the Digital Economy

Entrepreneur Deepa Asha Dewi had an unexpected misadventure in 2019: Water from heavy rainfall seeped into her stall and damaged $12,000 worth of...