BANKS have been hiking fees - a move that could help cushion the expected compression in their interest income - as analysts expect fee income contribution to rise for local banks.

At least one pundit, however, points out that the hikes might not generate higher fee income if consumers seek alternatives.

OCBC, however, was not the first among the local trio to fire the salvo. Its latest move to raise administrative fees for credit card foreign currency transactions followed Overseas United Bank's (UOB) September hike and DBS Group's November increase.

DBS and UOB spokesmen told The Business Times that they periodically review and adjust their fees to ensure that they are competitive and in line with the market. OCBC said its fees are reviewed "in accordance to adjustments within the industry".

DBS and UOB saw their loan-related and credit card fee and commission income edge up in the third quarter to September as well as the first nine months.

DBS reported a 6 per cent increase year-on-year for its third-quarter loan-related income to S$117 million and an 8 per cent improvement for its the nine-month figure at S$323 million.

South-east Asia's largest bank generated S$202 million in cards fee income or 9 per cent higher year-on-year for the third quarter and S$589 million or a 15 per cent increase for the nine-month period.

DBS Group CEO Piyush Gupta said at the bank's recent quarter results briefing: "Our fee income has been strong. The momentum is good and broad-based, from wealth management, cards, loans and cash management."

UOB posted loans-related fee income of S$152 million for the third quarter, 13 per cent higher year-on-year. The nine-month figure was S$468 million, up 10 per cent.

OCBC registered declines in both loan-related and credit card fee income for both the quarter and nine-month period.

The bank's loan-related fee for the quarter was S$78 million (down 3 per cent) and S$224 million (2 per cent lower) for the nine-month period. 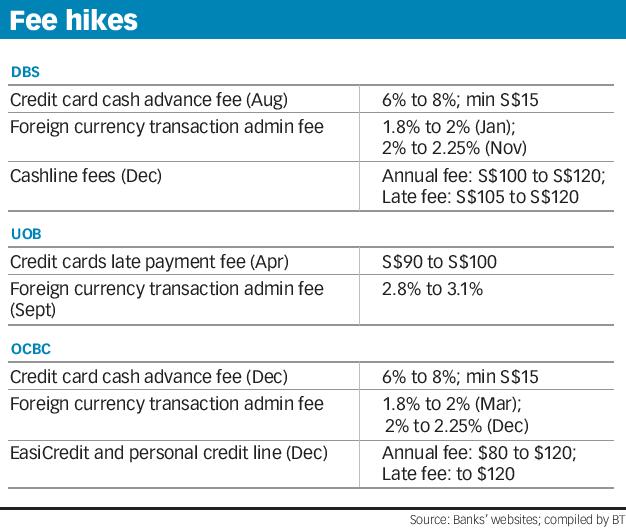 RHB Securities Singapore analyst Leng Seng Choon, in a recent report titled 2020 Earnings To Be Driven By Non-Interest Income, wrote that banks' total income should mainly be from non-interest income.

"The extent of benefit will depend on volumes as well. If bank customers shift to other methods for overseas spend such as YouTrip, it ultimately won't benefit fee income," he said.

YouTrip is a financial platform offering a multi-currency mobile wallet with a contactless Mastercard to make payments worldwide without having to incur any fees, according to YouTrip website. Its revenue comes from a cut of each purchase from the merchant through Mastercard.

On the other hand, RHB's Mr Leng said that local banks' net interest income is "seen to be flattish", given that their managements' guidance for a net interest margin (NIM) squeeze and soft loan growth.

Banks' NIM hinges on the Fed funds rate, which has been cut thrice this year.

The three-month Sibor has dropped from 2 per cent in late May to now hovering at 1.77 per cent. 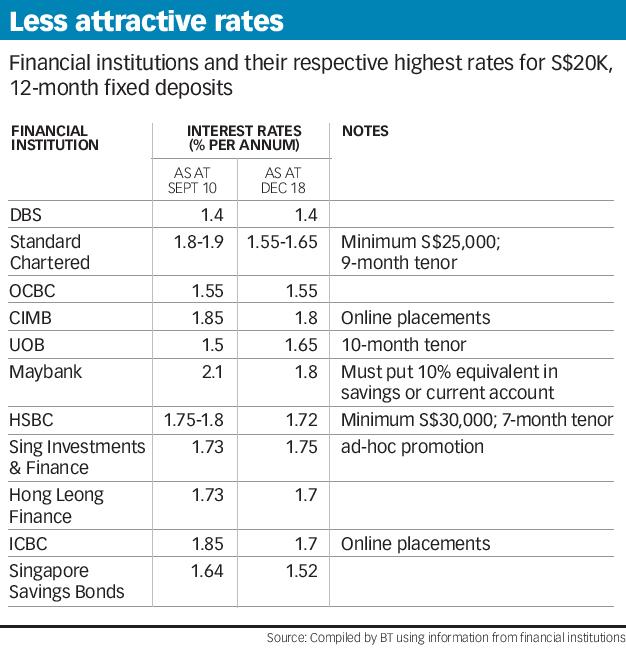 Compared with September fixed deposit rates, most banks and finance houses' December rates are less attractive, standing at 1.4 per cent to 1.8 per cent, following cuts ranging from 0.03 per cent (Hong Leong Finance) to 0.3 per cent (Maybank).

Only UOB and Sing Investments & Finance - among those that BT tracked - are offering higher interest rates than what they offered in September.

Phillip Securities' Ms Tin said: "Despite the recent Fed rate cuts and downward adjustments of FD rates, FD is still growing strongly. We believe that one of the reasons for sustained demand for FD was due to the saturation of appetite for Singapore Savings Bonds (SSBs). The total amount applied for SSBs in November and October was S$44 million and S$51 million respectively, down from the peak of S$457 million in February and YTD (year-to-date) average of S$252 million."

First-year coupon rate of Singapore Savings Bonds for the January issue (applications close on Boxing Day) is at 1.52 per cent - the lowest since the May 2018 issue.

In addition, tight liquidity in the banking sector sustained the competition for deposits, making it difficult to lower fixed deposit rates too much in the near term.

Still, she expects competition for fixed deposits in 2020 to ease, due to further rate cut expectations and slower global economic growth.

Singapore banks brace themselves for tough months ahead

Fortitude Budget could help to deal with expected rise in retrenchments: MOM official

SINGAPORE could roll out the fiscal big guns to save workers later on Tuesday, amid a souring manpower outlook, as officials gird their loins for...

SINGAPORE has tried both the carrot and the stick to wean companies off over-reliance on foreign labour, but the novel coronavirus might just be...

Who will do the dirty, intensive jobs that Singaporeans shun?

DESPITE sweeteners such as overseas work opportunities and higher pay, some jobs are persistently shunned by locals for being too dirty or...