THE government will step up the supply of industrial land to 13.9 hectares (ha) in the second half of the year, compared to the 11.25 ha it made available in the first half, which works out to a 24 per cent increase.

It will also waive the building-specification requirements for small industrial plots of one ha or less, but successful tenderers and subsequent owners will be barred from subdividing such developments into smaller strata units for sale for the duration of the whole tenure.

(Strata subdivision is currently prohibited for five years from the award of the temporary occupation permit upon completion of the development.)

Property consultants said the change is aimed at discouraging developers from purchasing these small industrial plots for investment; this way, industrialists will have an easier time acquiring such sites for their own operations.

The total of area of 13.9 ha is also higher than the 11.7 ha offered in the second half of last year. 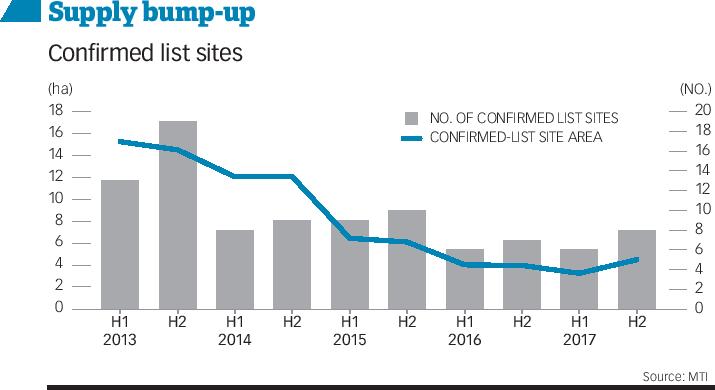 On the waiver of minimum building specification requirements - such as having to provide a minimum number of goods lifts and loading bays - for small IGLS plots, MTI said that this will give end-users more flexibility to customise the developments to suit their operations.

MTI said building-specification requirements will continue to apply to larger IGLS plots, which are meant for developers to build multiple-user factories.

Knight Frank executive director and head of industrial Tan Boon Leong said: "Such a ruling will discourage developers from coming in to bid up the land speculatively."

SLP International executive director Nicholas Mak suggested that the government could be doing this to address the oversupply of small strata industrial units of less than 2,000 square feet (sq ft) in the primary market.

"By disallowing the strata subdivision of factories on these small plots, it could bring a new equilibrium to the current imbalance in the industrial property market...

"Waiving the minimum building specification requirements for small IGLS plots is another encouragement from the authorities for bigger industrialists to acquire the smaller sites for their own use.

"In addition, this new regulation will restrict the future supply of small strata units from these smaller industrial plots.

"As a result, SMEs (small and medium enterprises) that want to buy small industrial units of less than 50,000 sq ft (0.46 ha) will have to turn to the existing launched industrial projects or the resale market. This could help to reduce the stock of unsold smaller units in the industrial property market."

Tay Huey Ying, who heads Research & Consultancy at JLL Singapore, reckons that less than 70 per cent of the multiple-user factory space completed since 2014 was occupied as at the first quarter.

Referring to the bump-up in industrial land supply, she noted that it is the largest - in terms of both total number of sites and total site area - since the second half of 2015. Back then, 14 sites covering 14.3 ha were released.

"The government may have taken into consideration the general uplift in economic and trade sentiment seen in the first half of 2017," she said.

The head of South-east Asia research at Edmund Tie & Co Lee Nai Jia said that although there is a slight oversupply of industrial space in the market, it is prudent to have some buffer in case of a spike in demand.

He said: "The land bids have been fluctuating at the same level, and the increase in supply is likely to keep the bids in check.

"For sites zoned B2 (that is, for heavier and more pollutive industrial use) in Tuas, the land bids should range from S$30 to S$37 per sq ft per plot ratio (psf ppr).

Mr Tan from Knight Frank noted that with a bigger industrial land supply has come a marked drop in the number of bidders for recently launched sites in Tuas South, from five to six bidders in the past to two or three currently.

This shows that boosting industrial land supply is indeed enabling industrialists to acquire land for their own use more easily. Furthermore, some bids for industrial land in Tuas have fallen below S$30 psf ppr, fuelled by the slowdown in the oil-and-gas sector.

Singapore to continue investing in its intangible strengths such as openness, trust and resilience, says Chan Chun Sing

[SINGAPORE] The Law Society (LawSoc) has warned of fraudsters targeting law firms in a scheme to steal funds through online transfers away from the...

Family behind Paris Baguette loses billions by taking on the world

[NEW YORK] Its stores are dotted around Manhattan, Singapore and Shanghai with blue neon signs that virtually scream France: The words Paris...

JAPANESE retailer Don Don Donki, which opened an outlet in Jurong in January, is currently set to open one more store in Singapore, putting it on...