LOCAL e-commerce Shopback is busy spreading its wings across the Asia-Pacific, with Indonesia and Taiwan among the latest additions to the marketing platform's global footprint.

Sembcorp Development, a business unit of energy, water and marine group Sembcorp Industries, has expanded its operations in countries such as China, Indonesia and Vietnam.

These are among the many companies that International Enterprise (IE) Singapore has supported over the years in the ongoing effort to help more Singapore enterprises go global.

Lee Ark Boon, the chief executive officer of IE Singapore, said internationalisation is "core" to sustaining Singapore's growth, and that his agency will continue to help local companies venture abroad.

A survey of nearly 700 companies which the statutory board conducted in the second half of last year found that their overseas revenue grew by 4.2 per cent year on year, outpacing total revenue growth of 1.3 per cent.

The survey, which collected data from the 2014 and 2015 financial years, involved companies that have internationalised, as well as those that are intending to.

IE Singapore said that more than half the companies polled had a presence in the top markets of China and Malaysia; firms are also increasingly interested in Vietnam, Myanmar and India. 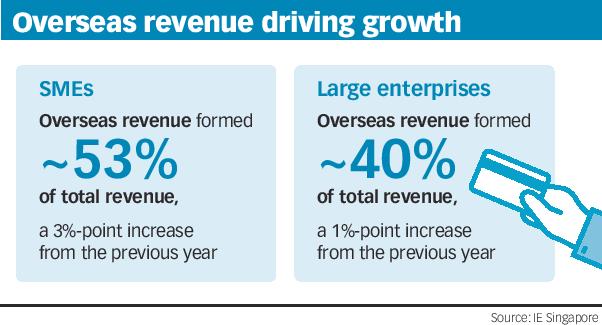 Small and medium-sized enterprises (SMEs) derived about 53 per cent of their total revenue from their overseas activities, a 3 percentage point increase year on year.

Among the large enterprises, the proportion is lower, but still significant - at around 40 per cent; this is up by one percentage point year on year.

Singapore's direct investments abroad (DIA) grew 2.5 per cent year on year to reach S$636.8 billion as at the end of 2015, with Asia accounting for the largest share at 54 per cent.

DIA growth in 2015 was driven by Asia, in particular emerging markets such as India, Vietnam and Myanmar; China, Hong Kong, Indonesia and Malaysia remained the top investment destinations within Asia that year.

The jobs created from companies' overseas operations were skewed towards the PMET (professionals, managers, executives and technicians) group - 61 per cent of internationalisation-focused jobs were such positions, higher than the 53 per cent for domestic-focused jobs.

The IE Singapore survey also found that overseas operations created jobs that were more likely to be skilled than domestic-only operations.

Overall, the agency facilitated more than 450 projects around the world last year, with the majority in China and South-east Asia.

Seventy-five projects were related to entry into completely new markets or new lines of businesses, which enabled companies to build up a track record and boost their credibility to clinch future deals.

Another 45 were in the e-commerce space - a 181 per cent increase from 2015; this came on the back of more companies tapping digital platforms and channels to access global customers and scale up.

Twenty-one projects were mergers and acquisitions (M&A), an 11 per cent rise from 2015. IE Singapore noted that companies were actively using M&A to acquire technology, capability or customer segments.

Last year, IE Singapore said it helped some 37,000 companies here, with SMEs accounting for 80 per cent of that total. More than 10,000 firms received S$73.4 million in grants.

More companies utilised the Market-Readiness Assistance (MRA) grant; 1,500 applications were approved, a 43 per cent jump from 2015.

Of these, one in five were companies that expanded outside Singapore for the first time to venture into China, Indonesia, Myanmar, Vietnam and India. Around 22 per cent of all MRA grant approvals were for activities in global online retail and e-commerce platforms.

IE Singapore added that it worked together with various trade associations and chambers to help their members internationalise.

There will be a focus on South-east Asia, China and India, which are where 20 of IE Singapore's 37 overseas centres are located.

"(We) will continue to deepen our in-market presence and network, to identify and create opportunities, and help our companies seize them. Through internationalisation, companies will transform and create high-quality jobs locally and secure sustainable growth for Singapore," said Mr Lee.

THE Budget put millions of much needed rescue dollars on the table for tourism-related sectors reeling from the Covid-19 outbreak. But...

BUSINESSES lauded moves in the Budget that will help them with their cash flow needs at this crucial juncture, but they are not certain if the...