SINGAPORE'S electronics sentiment entered positive territory in January for the first time in 14 months alongside positive manufacturing sentiment, thanks to a US-China trade truce, but economists warn that any optimism may be temporary due to the novel coronavirus outbreak.

The Purchasing Managers' Index for the electronics sector posted an expansion of 50.1, a 0.2-point increase over December's reading, according to the Singapore Institute of Purchasing and Materials Management (SIPMM) on Monday.

A reading above 50 on the index indicates growth.

After 14 straight months of decline, the latest reading was attributed to first-time expansions in the indices of new orders, new exports, factory output, and a faster expansion rate in the employment index, SIPMM said.

Meanwhile, January's manufacturing PMI recorded a growth of 50.3, extending December's expansion with an increase of 0.2 point. 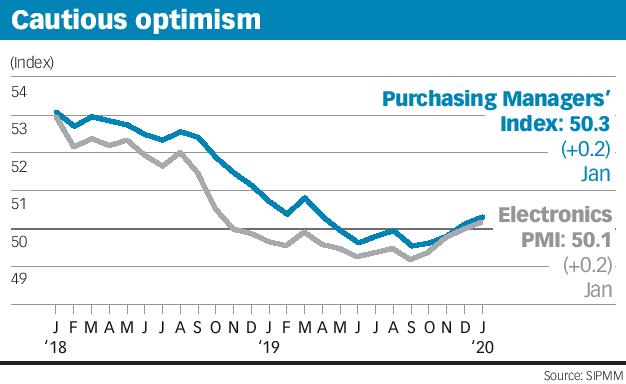 However, Sophia Poh, vice-president for industry engagement and development at SIPMM, noted that the survey did not capture respondents' concern of the virus outbreak, given that the cut-off date was Jan 22. Instead, it highlighted the cautious optimism of manufacturers on the Phase One trade deal between the US and China.

"In view of the accelerated outbreaks at month-end, I expect that the overall manufacturing sector will be impacted in the next PMI survey," Ms Poh said.

DBS Group Research senior economist Irvin Seah said: "The big question right now is whether the virus outbreak will disrupt the regional supply chain, particularly in China, and I think there's a risk that it will happen."

However, he believes things could return to normal after a marginal decline in the next one to two months, given China's push for firms to resume production after the Chinese New Year break. This is based on what happened during the severe acute respiratory syndrome (Sars) outbreak in 2003, he said, noting that the manufacturing sector saw full-year growth of 3.2 per cent despite shrinking 7.2 per cent in the second quarter.

The negative impact would be worse for the services cluster, including tourism and transport, he said.

Selena Ling, OCBC Bank's chief economist, said the key numbers to watch next will be the supplier deliveries index, both of which slipped 0.1 point in January to 50.7 for the manufacturing sector and to 50.4 for the electronics sector.

"While this could be partly due to the factory closures for the Chinese New Year festive holidays, nevertheless the widening coronavirus outbreak, coupled with the travel restrictions and quarantine orders for affected Chinese workers, may only start to show up more significantly in subsequent data and some caution may be warranted if there is any cascading effect into the rest of the economy," Ms Ling said.

ANALYSTS are pencilling in a solid economic recovery for Singapore and the region, after non-oil domestic exports (NODX) surged in December.

SINGAPORE'S key exports capped the year with a surprise increase in December that broke a two-month losing streak, on the back of non-electronics...

SHIPPING containers with a volume of 36.9 million twenty-foot equivalent units (TEUs) passed through the Port of Singapore in 2020, down by 0.9...