FISHING demands a great deal of patience and perseverance. While some may prefer to wait in their boats for the first bite of the day, others favour changing their fishing techniques to secure their catch.

The same strategy applies to running a business, according to Lee Seng Shoy, the managing director of Hong Guan (Tackle), a distributor of fishing tackle based in Singapore.

The company, a first-time winner of the Enterprise 50 Award in 2017, is known in the region for Pioneer Tackle, its proprietary brand of fishing gear that is currently distributed in 31 nations worldwide.

Despite its current foothold in the industry, Hong Guan continues to explore new ways to improve its business. "Business is a probability game. Those who dare to try will live to fight for another day," said Mr Lee.

Hong Guan, founded in 1942 by Mr Lee's great-grandfather, was a typical family business that distributed ropes, hardware and fishing nets. While business had remained stable, Mr Lee saw potential for greater growth and made key changes to revitalise the business shortly after taking over in 1997.

The company stopped its distribution of commercial fishing equipment and concentrated on the fishing tackle business, as Mr Lee had strongly believed that staying focused would be the key to Hong Guan's survival. He was also optimistic that lifestyle businesses would thrive amid South-east Asia's emerging economies and growing affluence. "I have always had faith in Southeast Asia as an emerging market. The population is large, young and dynamic," says Mr Lee.

However, Mr Lee soon realised that he had no control over the company's growth and was unable to meet customer needs, due to geographical restrictions imposed by the suppliers.

"By having your own proprietary brand, you decide what, where, how, and to whom to sell. The whole world becomes your stage," shares Mr Lee. One incident involving the sudden termination of a distributorship agreement eventually gave Mr Lee the final push to launch Hong Guan's very first brand, Pioneer Tackle.

While establishing the Pioneer brand overseas was no easy feat, Hong Guan's success in positioning its brand in different markets is attributed to its value proposition and customisation efforts.

The company markets the Pioneer brand towards beginners who are willing to pay slightly more for a better product. Mr Lee draws product parallels with Japanese cars, trusted for their quality and reliability at an affordable price.

These same qualities have set them apart from their competitors who focus on the higher-end or lower-end segments. The company also prides itself on being a home-grown brand that is designed and developed in Singapore.

Hong Guan's value proposition is that it emphasises customising its products to suit different markets. The company studies local fishing styles and cultures by staying close to the ground.

When venturing overseas, Hong Guan often exhibits at major international trade shows to establish their brand in key markets and to bridge them closer to their local customers. The products are tailored to suit the needs of each market, such as by modifying appearance, pricing or even the marketing style used.

The company has also recognised the need to shift from the print media to social media alongside the evolving consumer trends. Hong Guan now utilises local influencers and social media extensively to engage its customers. For example, Clarke Gayford, the host of the fishing documentary show Fish of the Day, is currently endorsing Pioneer's products in New Zealand.

Hong Guan continues to trial new ideas to cover a wider spectrum of fishing and related activities. Mr Lee shares that he encourages his team-mates to challenge norms and come up with "constructive, innovative and 'crazy' ideas".

Last year, Hong Guan re-entered the Singapore retail market after a six-year absence, launching its first Pioneer concept store in Ubi along with an online store. The approach taken by the company in Singapore differs vastly from its existing markets and will serve as a testbed for a new direct retailing model.

The company sees potential for cross selling by providing customers with a comprehensive suite of services. While still in its early stages, Hong Guan has begun introducing services such as boat chartering to complement its retail business.

Hong Guan has also introduced new methods of marketing and selling fishing gear in Singapore. The concept store in Ubi houses the first fishing simulator in Singapore, which allows customers to test fishing rods on a machine that mimics the movement of a real fish. Fishing enthusiasts can even specify the species of fish to match their fishing preferences.

Hong Guan plans to further develop its existing line of vending machines rolled out near the local fishing spots last year. As labour costs increase, especially in markets like Singapore, Mr Lee hopes to use vending machines to supply most of the equipment needs of the anglers, and give fishing enthusiasts greater convenience.

As people pursue recreational activities to deal with the increasing pressures of life, Hong Guan remains positive that people will seek to reconnect with nature through activities like fishing. Eventually, Mr Lee wants to position Hong Guan as an outdoor lifestyle company that supplies equipment for more outdoor activities.

Although it was a bold move to create a proprietary brand from scratch, it is a testament to the company's customer-centricity and willingness to build long-term brand value. Much like his own approach to transforming his family business, Mr Lee urges business owners to "stay crazy" and "never give up" in the face of inevitable challenges. 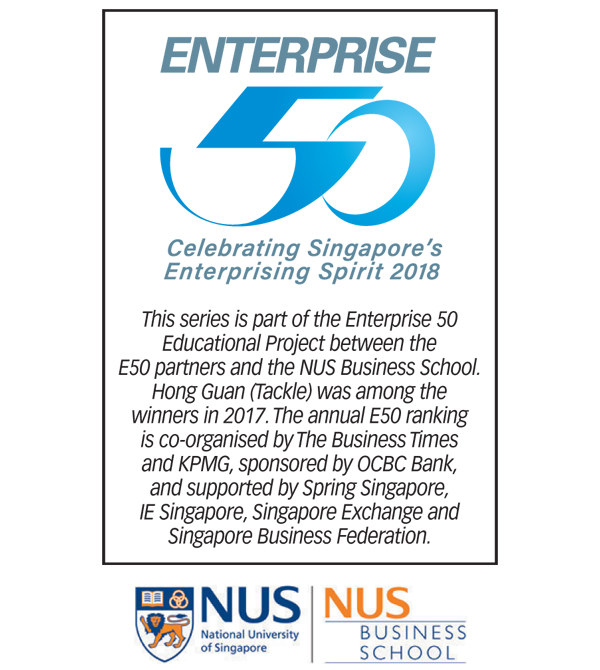 Going with the flow of business

Leveraging technology in greening the future

AS BUSINESS gradually resumes in the recovery phase of Singapore's pandemic response, manufacturers here are making major changes to their supply...

AT one popular hawker centre in Jurong West, there are hardly any crowds during lunch time these days, with one noodle stall owner lamenting that...