THE coronavirus pandemic has, in a matter of months, unleashed an unprecedented crisis and disrupted the lives of millions around the world.

On the ground, different segments of the economy have been hit to different extents. Those working and living in Singapore are no exception.

In the city-state, a boom in stock investments, rising property purchases, stubborn COE prices and staggered recovery across sectors tell the story of a K-shaped recovery. Here are some figures to show:

For every 1,000 professionals, managers, executives and technicians (PMETs), 2.7 were axed in April-June this year.

The figures were 4.5 for clerical, sales and service workers, and 4.0 for production and transport operators, cleaners and labourers.

The job-loss disparity has widened since the first quarter when the retrenchment rates among all groups of workers were more similar - 1.7 for every 1,000 PMETs, 1.5 for clerical and service staff, and 1.6 for workers in roles that included production and transport operations. 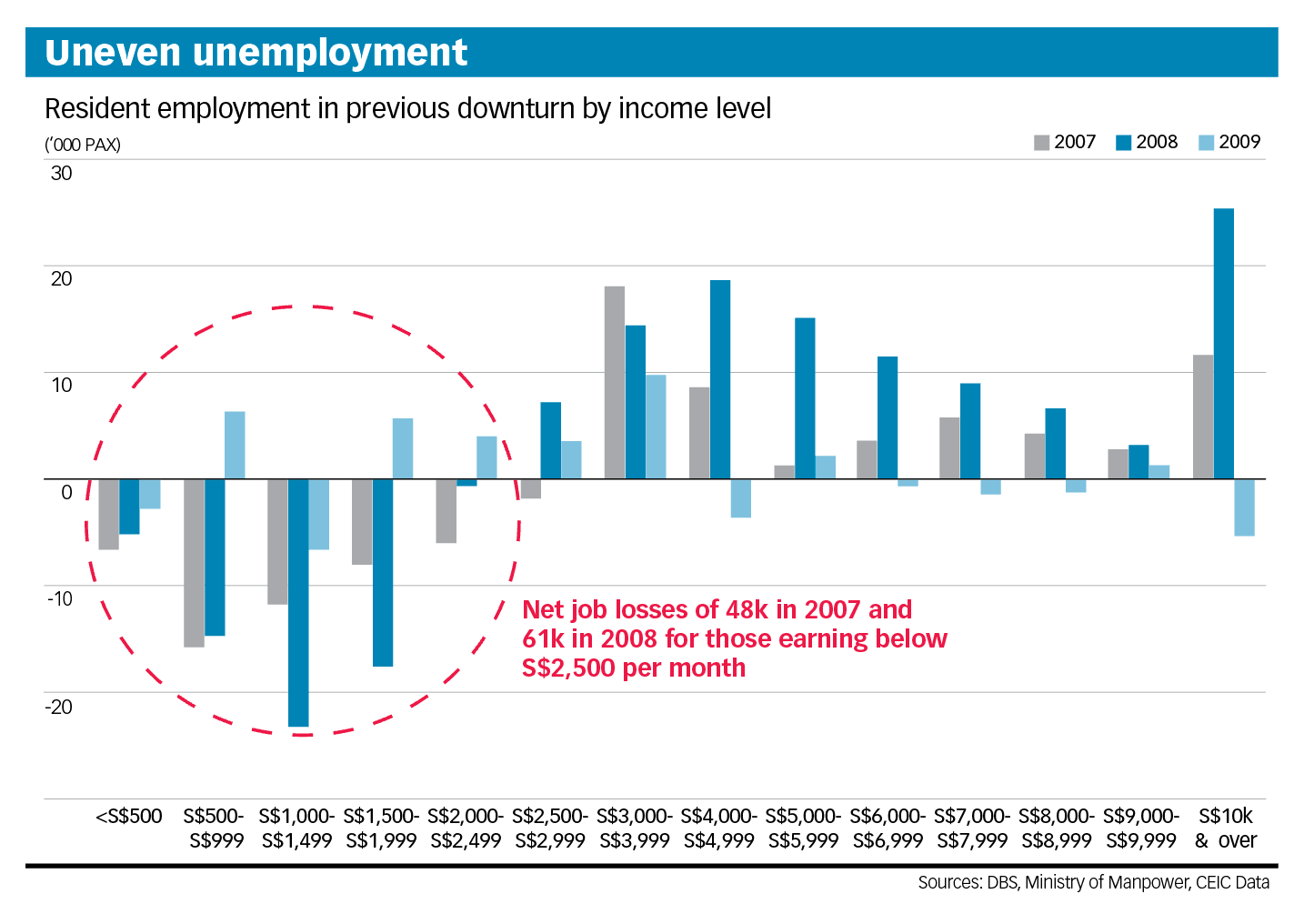 From March to May this year, Singapore's largest bank, DBS, pored over anonymised data of 1.2 million retail customers to produce a report, made public in August.

It showed that lower-income earners (S$2,999 and below) made up about 49 per cent of DBS customers that saw a drop in salary. Within this group, about half saw their income fall by over 50 per cent. Four in 10 of these DBS customers had less than a month's emergency funds.

The extent of income deterioration in the food and beverage, hospitality and aviation sectors was even more pronounced compared with other industries.

A recent Credit Suisse report also said Singapore recorded a gain of US$23,380 in household wealth per adult in 2019, but this gain was driven by households with a growing equity portfolio - thanks to a bull market.

Singapore's private-home price index rose 0.8 per cent in the third quarter of this year from the preceding three months, and grew 0.65 per cent year on year.

Private-apartment ownerships and data on household income trends over the past decade show that the rate at which people in the 61st-90th income deciles upgraded into condominiums outpaced those from the lower-income deciles.

The demand for automobiles in Singapore has also not dulled despite the pandemic, as rising Certificate of Entitlement (COE) premiums for small and large cars suggest.

A study by financial analysis platform Value Champion showed that the ultra-luxury car market remained relatively resilient, with four in 10 new car registrations in April and May accounted for by luxury brands, despite the suspension of COE bidding and showroom closures.

While the Credit Suisse report said it's still early days to fully assess the impact of Covid-19 on global wealth distribution, it acknowledged that particular groups, including the low-skilled and small businesses, have suffered from this crisis.

The report noted that the combination of fiscal and monetary measures to create a low interest rate environment has helped to soften the blow on households, but it also pointed out that government assistance is due to be curtailed.

"The pandemic will have important repercussions on income distribution," the report said.

About 1,250 Shell employees to benefit from upskilling

Clean energy pivot will yield green jobs, but time needed to fill them

DBS and Standard Chartered (StanChart) will again slash rates on their respective savings accounts from Jan 1, 2021 on the back of a grim interest...

SINGAPORE banks have ramped up support for micro enterprises with collateral-free loans, they said on Wednesday.

Tee Yih Jia stays the course in Europe despite pandemic

THE coronavirus pandemic may be heavily disrupting Tee Yih Jia's export business in Europe now, but it has not dampened the Singaporean frozen...