AS LABOUR costs increase and human resources (HR) function assumes a more strategic role to focus on the recruitment and retention of talent, there is an increasing need to automate the basic HR functions of payroll, leave, attendance and expense claims. JustLogin was founded in 1999 to provide an online platform and cloud software to help small and medium enterprises (SMEs) manage their basic HR functions.

Many SMEs find JustLogin's products and services useful as they do not have the resources and skills to set up a system and delegate a team to manage these basic HR functions, says K C Kwa, the founder of JustLogin.

He was the head of the IT department of Defence Science Organisation (DSO) National Laboratory in the early 1990s. His passion and numerous ideas to streamline processes and improve the lives of his colleagues at work led him to excel at his job. "I love innovations and had many ideas to automate the manual processes," he says.

Mr Kwa found that working in a government department had its advantages as the Singapore government in its pursuit of productivity had dedicated necessary resources to computerise manual processes. After leaving his public service position in 1995, Mr Kwa found that many such processes in the private sector remained predominantly manual as it was costly to automate.

"Not many companies could afford or were willing to invest in such software, especially the SMEs," Mr Kwa explains. "I thought if I could develop the software, put it on the Internet and allow any company to use it, wouldn't that be great?"

"There was a gap, and I decided to focus on HR software to fill this gap. We want to provide our customers with a reliable, secure, affordable and user-friendly HR software." To fund his startup, Mr Kwa invested all of his savings, but still required a loan to recruit developers and build the software from scratch.

Shortly after the launch of JustLogin came the dotcom crash in March 2000. Many Internet companies reported huge losses and a large number folded. Mr Kwa had faith in his business model and its potential for success and he decided to press on.

However, the company had to make the painful decision to halve the number of staff from 25 to 12 in order to survive in this difficult economic environment. His perseverance and faith were rewarded when JustLogin managed to raise its first round of Venture Capital investment at the end of 2000.

JustLogin was fortunate to land AT&T as its first client in Singapore and was able to leverage the profile and reputation of AT&T to win other customers such as Air France, KLM, Ikea, Hai Di Lao and Owndays. Besides building its brand image, JustLogin also ensures its software stays relevant for its customers by constantly seeking feedback from them. Today, JustLogin has over 1,500 customers in Singapore and the region.

There is always the risk of large enterprises such as Microsoft, Google or Apple offering similar software to help automate company processes, so a small IT company may not survive. Mr Kwa, however, believes that big companies will not be as interested in HR processes that require localisation such as payroll and leave due to the complexity of different labour laws in different countries and the changing nature of such laws. The need for familiarity with the market and keeping pace with regulatory changes will deter big companies from providing localised HR software.

The areas that require localisation include the minimum days of annual, medical and maternity leave and pension fund payment. To better illustrate the difficulties in localisation, Singapore's Central Provident Fund (CPF) contribution rate alone is dependent on the employee's citizenship, age and monthly wage.

If there are changes to the CPF Act, the software must adjust swiftly in accordance to the revised law. While this may seem complex, JustLogin is more familiar with the nuances of the different labour laws in Asia and has thus, chosen to focus on providing localised HR software services to countries in this region.

JustLogin has a unique approach in targeting the emerging regional markets, where the Internet infrastructure is less developed such as Indonesia and the Philippines. It has adopted a "wait there, park there" strategy whereby it acquires the initial few clients to gain market insight while waiting for the market to grow.

In this way, the company is able to avoid huge mistakes and develop software which are effective in enabling the company to build a strong presence in the market. Besides revising its software to adapt to the changing labour laws of the specific markets, JustLogin is responsive to the changing technological and business environments.

Mr Kwa is of the view that the future of JustLogin will be closely tied to the smartphone trend. "The most influential change is the rise of smartphones. Every smartphone user wants wi-fi and Internet access. They want to do everything online."

He welcomes the rising trend of smartphones and is pleased that it has brought about increased online accessibility, which helped introduce more consumers to the idea of cloud services that JustLogin adopts.

JustLogin's mobile app is one of its most popular features, allowing employees of its clients to view their itemised payslips, apply for leave and even clock in to work using their smartphones anytime and anywhere. In the near future, JustLogin is also looking at delving into newer technologies, such as automated chatbots.

By embracing change and recognising the need to future-proof themselves, JustLogin has set itself apart from its competition. Together with the passion to improve the lives of others, Mr Kwa is determined to take JustLogin to new heights through continuous innovation of HR processes. 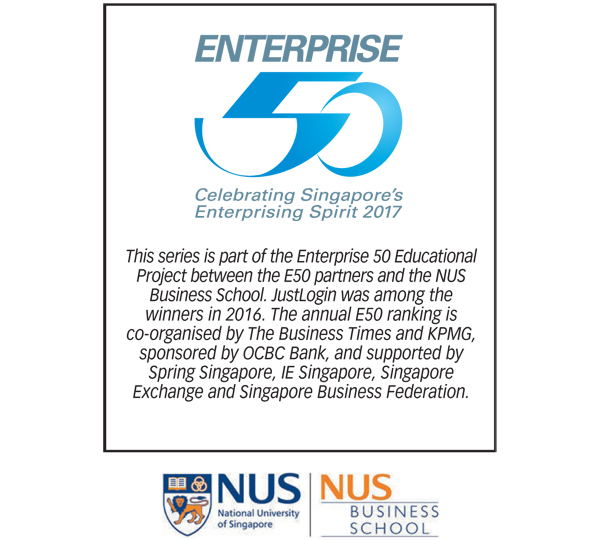 Asia-Pacific retailers bounce back from pandemic with new growth plans

CONCERNS have been raised that the moves to tighten employment conditions for Dependant's Pass (DP) holders could hurt startups, underutilise...

Adopt US SPAC rules - but with tweaks for Singapore, say observers

THE Singapore Exchange (SGX) should model its regime for special-purpose acquisition companies (SPACs) after what is being done in the United...