THE government has committed a record S$48.4 billion in a supplementary budget unveiled on Thursday to help Singapore weather the Covid-19 crisis, with in-principle support gained to draw up to S$17 billion from past reserves, said Deputy Prime Minister and Finance Minister Heng Swee Keat.

If it becomes necessary, the government is prepared to propose to the President that further draws be made on past reserves, he added.

Some S$20 billion of the new Resilience Budget is set aside as loan capital, alongside enhancements to financing for firms. Other measures include larger wage offsets, property tax rebates of up to 100 per cent, deferment of corporate income tax, and more help for harder-hit sectors.

This comes just five weeks after the original Budget on Feb 18 - when there were only 800 confirmed Covid-19 cases outside China, as Mr Heng noted. But the outbreak has since escalated, and global growth forecasts have plunged.

The dramatic response was unveiled on the same day that Singapore's official growth forecast for 2020 was downgraded into negative territory, between -4 per cent and -1 per cent, from the earlier range of -0.5 per cent to 1.5 per cent.

Together with S$6.4 billion in the original Budget, a total of S$54.8 billion - or 11 per cent of gross domestic product - has been dedicated to supporting the country in the outbreak.

"This is a landmark package, and a necessary response to a unique situation," said Mr Heng.

With Singapore facing possibly the worst economic contraction since independence, the package has measures to save jobs and support workers; help firms in the short-term; and strengthen long-term resilience.

The Jobs Support Scheme's wage offsets will rise to 25 per cent, up from the previously-announced 8 per cent, with more for badly-hit sectors: 50 per cent for food services, and 75 per cent for aviation and tourism.

The monthly qualifying wage cap will be raised to S$4,600, and support will be extended for another two quarters. There will be income relief and more training support for the self-employed, larger payouts for the low-income, and a grant for the unemployed. New schemes will offer 8,000 traineeships and 10,000 new jobs.

The Resilience Budget addresses firms' concerns of cash flow, costs, and credit. Companies will get automatic deferment of income tax payments due in April, May, and June.

Property tax rebates will go further. Commercial properties that qualified for Budget 2020's rebates of 15 to 30 per cent will now pay zero property tax for 2020.

A new property tax rebate of 30 per cent will be granted for non-residential properties such as offices and industrial properties. Rental waivers for tenants of government properties will be increased.

Financing will be improved, including the extension of the Temporary Bridging Loan Programme to all industries, with the maximum supported loan increased to S$5 million.

The Monetary Authority of Singapore is working with banks and insurers on how to help businesses and individuals with loan obligations and premium payments.

More will be given to the worst-hit sectors, with a S$350 million enhanced aviation support package; S$90 million for the tourism industry's eventual rebound; more aid for taxi and private hire car drivers; and S$55 million for arts and culture. 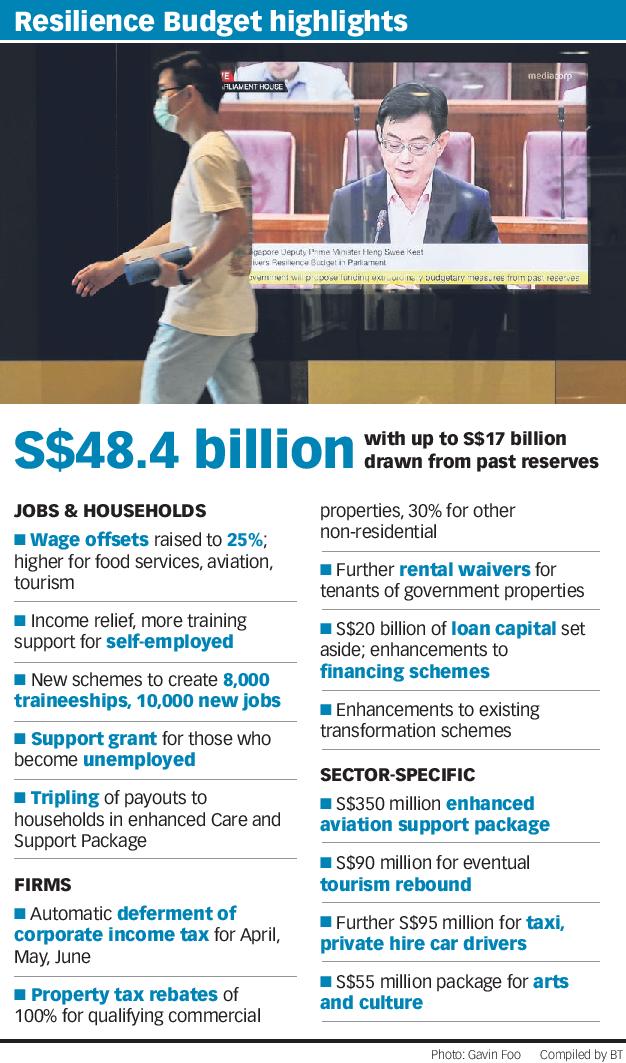 The package is clearly focused on protecting Singapore for a potential downturn of a year or more, said Deloitte Singapore and Southeast Asia regional managing partner for tax and legal Low Hwee Chua.

For households, the cash payouts in Budget 2020's original Care and Support Package will be tripled.

Self-help groups and community development councils will get more in grants. Even as the package focuses on tiding through the crisis, it allocates S$1.9 billion for longer-term resilience.

This includes research and development - the importance of which has been reinforced by the virus outbreak, not least in areas such as health and food security - as well as enhancing transformation schemes, and supporting training.

The pandemic is the most serious crisis in a generation, said Mr Heng: "It is a public health crisis, an economic shock, and a social test."

More safe distancing measures may be needed as the situation develops, but the government will provide help to mitigate the impact and support responsible behaviour, he said.

Years of prudence and discipline have allowed Singapore to build up the reserves needed for such a rainy day, with Covid-19 being "a mighty storm" that is still growing, he said.

In these exceptional circumstances, the government sought and obtained President Halimah Yacob's in-principle support to draw up to S$17 billion from the past reserves.

But uncertainty remains over the outbreak's future course. The government will continue to monitor the situation closely, and do more as and when needed, said Mr Heng, including proposing further draws on past reserves if necessary.

Though the size of the package is impressive, given the speed at which the virus is spreading, it is still hard to say if it is enough, said PwC Singapore tax leader Chris Woo.

With this supplementary budget, the overall budget deficit for FY2020 has risen to an unprecedented S$39.2 billion or 7.9 per cent of GDP, up from the initial S$10.9 billion estimate.

In the spirit of solidarity, political officeholders will take a further two-month pay cut, on top of the previously announced one-month cut, said Mr Heng, adding that President Halimah, Speaker Tan Chuan-Jin, and both Deputy Speakers have chosen to take a similar three-month pay cut in total. "We are all in this together."

Relief measures offer respite but banks can do more: SMEs

Measures won't stave off recession but will contain damage: economists

Kurt Wee, president of the Association of Small and Medium Enterprises joins us to help us find out what the business community thinks of the...

SPH Reit on Wednesday announced that it would distribute just 0.30 Singapore cent per unit for its second quarter ended Feb 29, 2020.

Foreign workers can now be transferred across sectors in Singapore

FROM April 1, more firms will be able to hire foreign workers who are already in Singapore, with the expansion of a temporary Manpower Ministry (...