IT'S too early to estimate fifth-generation (5G) network-related spending, Singtel group chief executive Chua Sock Koong said, even as the mainboard-listed telco posted a steep slide in its annual profit on Wednesday.

Fourth-quarter earnings barely budged from that of the year prior on the back of currency changes and lower contributions from associates, as Singtel's annual profit fell to a 16-year low.

But the higher top line was driven by Optus' contribution from the Australia-wide return to the national broadband network (NBN) rollout after a temporary halt. Otherwise, revenue for the quarter would have ticked up by just 0.2 per cent.

Meanwhile, regional associates' pre-tax earnings dropped by 20.4 per cent to S$389 million, dragged down by losses at Bharti Airtel in India.

The core consumer business accounted for 56 per cent of the operating revenue, followed by a lower-margin enterprise segment at 38 per cent, then the loss-making new digital life arm. 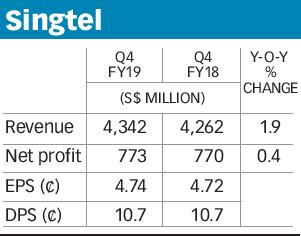 Mobile average revenues per user have fallen broadly in Singapore; Singtel attributes this to cheaper data and the popularity of SIM-only plans.

But Yuen Kuan Moon, who helms the Singapore consumer business, said that from a service perspective, "we don't just follow the market trend by just offering cheap data plans and unlimited-data plans, because that's probably only one segment".

He said that Singtel is working with its mobile virtual network operator (MVNO) partners "to see how they can enlarge penetration" in their consumer niches, and added that, in the wider market, "to our knowledge, there will be a few more MVNOs about to start in the next few months".

Yet, when asked about M1 partner Circles.Life's plans to move into regional markets, including those where Singtel is already a player, Mr Yuen said: "Firstly, Indonesia, there is no MVNO licence per se, so I'm not sure how an MVNO can operate in a country where there is no such licence. I think, in Australia, there are also a lot of MVNOs currently in play."

With legacy carriage operations like voice services on the wane, Bill Chang, head of group enterprise, noted that infocomm technology (ICT) now makes up more than half of Singtel's enterprise turnover.

"Just maintaining our position in the core carriage will not be sufficient to sustain value; we have to invest in growing ICT," he said at the earnings briefing, adding that investments are being made in areas such as cloud and analytics digital services.

"All this will be in the low- to mid-teens kind of margins, so you will expect ICT as a growing mix of the overall business. It's a case of managing the costs in this transition."

For the full year, net profit was nearly halved, falling by 43.5 per cent from S$5.47 billion to S$3.09 billion - largely on a bonanza the previous year from the divestment of broadband player NetLink NBN Trust, and a resulting decline in its contributions.

Singtel expects consolidated revenue - excluding Australian NBN migration - to notch mid-single digit growth in the year ahead, with projected capital expenditure of some S$2.2 billion, largely Down Under.

But Ms Chua told the briefing that "we are not in a position to speculate on what the capex could be" for 5G in Singapore, as the IMDA has yet to decide on network and market rules.

With spectrum expected to be available only from 2021, "significant capex spending would only, for the Singapore 5G network, happen then", she added. "We will continue to make investments in building our 5G use cases before the big rollout."

She noted that Optus has introduced fixed-wireless access 5G capabilities in Australia "and the capex guidance that we have provided would include further 5G spend".

Arthur Lang, head of international business, noted that some of the group's telco associates - mainly Airtel and Indonesia's Telkomsel - "have had a tough year, and, of course, that has impacted our results".

But the management was bullish on the room for recovery, citing Airtel's fund-raising efforts and market potential, such as growth in data use.

Singtel also said that it was looking to save about S$490 million from belt-tightening measures such as digitalisation and automation to tweak customer service and trim staff costs.

The board has recommended a final dividend of 10.7 Singapore cents a share, bringing the full-year payout to 17.5 Singapore cents, as promised. It expects to maintain this dividend policy in the coming year as well.

With additional reporting by Vivienne Tay

Citi high-flyer to steer Grab on its digital bank path

THREE mammoth budgets in the space of just seven weeks. It's never been done before in Singapore's history. Even so, there was still the assurance...

REAL estate agencies are rolling out support packages to their salespeople to tide them over the mandated one-month stoppage due to Covid-19.