THE entrepreneurial world has often been described as a jungle gym, where only the fittest and smartest survive.

Enterprise 50 (E50) Award winner Elixir Technology is not daunted by the odds, and has ambitious plans to be a provider of world-class solutions in the "Smart Nation" field, particularly in the domains of urban mobility, healthcare and regulatory technology (RegTech).

Elixir's founder and chief executive officer Lau Shih Hor never imagined that the startup that was originally in training and consulting would one day become a full-fledged smart-solutions company.

By leveraging the government's concerted efforts to transform Singapore into a Smart Nation, Mr Lau is steering the company towards the future.

Elixir Technology was born in 1993 as a software engineering firm, and those early days were difficult.

Mr Lau said: "Technopreneurship was not a popular concept at that time. It was difficult to convince anyone to provide you with funding if you did not have your own factory or office."

The team would frequently meet in each other's living rooms, and even at benches outside MRT stations. Data had to be painstakingly exchanged using stacks of floppy disks or LapLink cable.

Yet, despite those humble origins, there was a common belief among all at Elixir that they could play a part in how technology would change the world.

While the company made good progress in software engineering, Mr Lau saw the need to keep an open mind on technology trends - but exploring new areas required funding, which was not easy to obtain.

Eventually, the company launched its own software, with three software tools which rode on the rise of Java programming environment.

"Our target audience was the world of Java developers. We tracked the trends to address the market," Mr Lau said, a tinge of pride in his voice.

However, the market changed with the emergence of Open Source Software (OSS). Source codes, especially software developer tools, were made publicly available for modification, usage and distribution.

This effectively stalled Elixir's growth, so the company needed a new direction. It then set its sights on business intelligence, or BI, with its reporting tool as its new starting point. With the ever-increasing amount of data becoming available, executives are often faced with information overload. Extracting and summarising raw data to make meaningful and actionable information was the new order of the day.

The growth in demand for BI solutions attracted the attention of the "big boys", among them Oracle, SAP and IBM, and overnight, became Elixir's competitors.

With this new development, Mr Lau knew that a niche BI player like Elixir would find it a challenge to grow, though its customer base had by then become a major source of revenue. He had to seek a new area of growth yet again.

This time, he was determined not to put all his eggs into one basket. Leveraging Singapore's stability and role as a financial, healthcare and data hub, Elixir diversified into three main areas: urban mobility, healthcare and RegTech.

Among a series of projects initiated by the Infocomm Development Authority (IDA) - now called Infocomm Media Development Authority (IMDA), Elixir and its partners were selected to develop a smart queue management solution aimed at reducing waiting time for taxis by using video analytics to monitor queue lengths and waiting times to trigger taxi despatch. Shoppers could also view real-time updates on the status of the queue to make transport decisions.

In line with the Singapore government's push to transform Singapore into a smart healthcare hub, Elixir has partnered with healthcare experts in the medical field.

Leveraging their knowledge, it provides the analytics platform for the Internet of Things (IoT) integration, visualisation and analytics application to produce the best-of-both-worlds solutions.

In 2014, Elixir took over BizNet-Global to form wholly owned subsidiary BizInsights, which operates like a start-up in Regulatory Technology (RegTech). BizInsights builds on the content provided by the Accounting and Corporate Regulatory Authority (Acra) to provide data and insights for companies carrying out due diligence for their Know Your Customer (KYC) initiatives.

This increased vigilance is part of the government efforts in anti-money laundering and in countering the financing of terrorism.

As the challenge involves cross-border transactions, BizInsights must extend its coverage beyond the shores of Singapore.

Mr Lau said: "A lot still has to be done. We have established partnerships with Indonesia, Japan and beyond. We cannot depend solely on the data that Singapore government has when this requires international co-operation to adequately address this global issue."

He believes that there is less to fear from technical disruptions than changing market conditions.

"When there is a new technology introduced, we have the capability to adapt to it," he said.

From software engineering training and consulting to Smart Nation, Elixir has been able to transform its expertise to meet the needs of a dynamic and ever-changing economy.

It is versatile enough to tactically develop in areas congruent to the direction of Singapore's prospects, brave enough to take risks and learn from both success and failure, and conscious enough to be aware of the challenges.

Yet throughout its journey, it has not forgotten the inspiration that had led to the birth of Elixir - the dream to create the next big thing that could change the world. 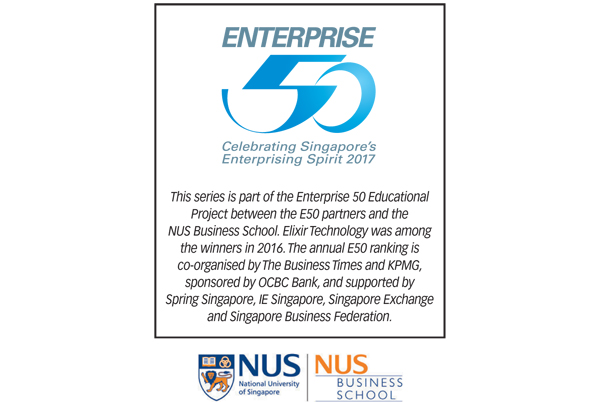 Going with the flow of business

Leveraging technology in greening the future

HAVING corporate experience helps with the job, says Ang Khim Wee, who - with two sisters - is part of the next generation helping to run the...