SINCE end-2015, food-delivery platform foodpanda has grown its base of delivery persons more than six times to over 6,000, the company's Singapore managing director Luc Andreani said.

How has such phenomenal growth been possible? "One reason is that we pay competitively," he said, after a moment's pause.

"Actually, to be very honest, that's the biggest reason. At the end of the day, riders are choosing players they make the most money with."

The explosive rise of the on-demand economy - whether in food or parcel delivery services - has swelled the opportunities and compensation for delivery persons, but questions of sustainability are looming as industry watchers ask what is driving the boom more - real productivity gains or aggressive venture money.

Like foodpanda, Deliveroo has more than doubled its number of delivery persons every year since 2015; as at the end of last year, its pool was 6,000 strong.

GrabFood, which debuted in Singapore after UberEats exited the scene in May last year, already boasts 10,000 delivery persons.

On-demand courier services Lalamove and GoGoVan both also report growth in their pools of delivery persons. These two companies rely on motorcycle riders and drivers of cars and other vehicles such as vans and lorries; they declined to give a breakdown by vehicle type.

But GoGoVan Singapore country manager Patrick Wong disclosed that its number of motorcycle delivery riders rose by a quarter between 2017 and last year. The increase was partly driven by more food delivery riders joining GoGoVan to fill the idle hours between their shifts, he said.

GoGoVan has 25,000 registered delivery persons in total here, a few thousand of whom ride motorcycles. 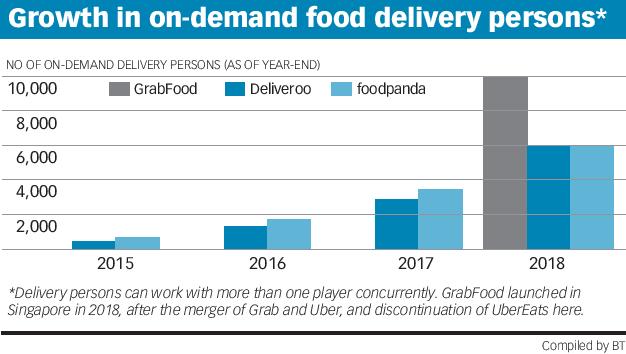 The growth in on-demand delivery persons comes amid the rise in "own account workers" in Singapore - self-employed individuals who do not employ paid workers. As startups successfully woo more freelance riders their way, the issue of labour cost sustainability is more crucial than ever, industry watchers tell The Business Times.

After all, both food-delivery and courier startups fight tooth-and-nail for the same pool of such freelancers. "At the end of the day, with gig work, you're only going to be as successful as whether your riders make money," said Ali Potia, head of McKinsey's Asia Consumer Insights Centre.

There is no shortage of attractive wage models. In November 2018, for instance, foodpanda introduced a new service-fee structure under which e-scooter and bicycle riders could earn 30 per cent more per hour - as much as S$26.90 in high-demand areas - compared to previously; motorcycle riders stood to pull in more than 20 per cent more in their hourly earnings - S$29.90 in high-demand areas. (Riders can still choose between the old and new service-fee structures.)

In this battle, high payments to delivery persons is a weapon that has to be used with caution. In an ideal scenario, "cool heads prevail" and the startups temper the incentives they offer, creating an equilibrium in earnings set by market forces, Mr Potia said.

But if players don't back down and payment wars break out, consolidation is possible, as with the case of the Grab and Uber merger last year. Mr Potia added: "Some might argue that the Grab and Uber merger was precipitated by escalating discounts to passengers. But it was just as much precipitated by escalating incentives to drivers. At some point, there is a shake-out."

Whether the on-demand delivery scene is due for a similar shake-out is hard to tell, given the lack of data on delivery persons' earnings. The startups declined to share their delivery persons' average earnings with BT.

Anecdotally, however, it is not uncommon to hear of on-demand delivery persons earning enough to leave their traditional counterparts - that is, those not working for on-demand delivery apps - in the dust. Consider Danish See Abdullah, a 37-year-old food delivery rider for two on-demand services. He makes S$3,700 in gross earnings a month riding about 45 to 60 hours a week on his e-scooter.

Going by Ministry of Manpower data for a rough comparison, motorcycle delivery riders earned a median gross monthly wage of S$2,070 in June 2017; those in the 75th percentile earned S$2,545.

Mr Danish, who used to earn a gross S$2,200 monthly as a full-time clerk with a decade's experience, plans to enjoy the boom for as long as it lasts. "I don't really know of any other job that would actually pay me this much," he said.

Logistics veteran Paul Lim, founder and president of Supply Chain Asia, quite flatly thinks that the startups are over-paying. "The industry is not professionalised yet. In a non-professionalised setting, whatever you make is not real, not sustainable. Very soon, it will be gone. Look at those people who earned S$8,000 in ride-hailing; they don't exist anymore," he said. "To me, this is like striking 4D (lottery)."

Walter Theseira, associate professor of economics at the Singapore University of Social Sciences, suggested an alternative hypothesis - that on-demand delivery persons may earn more because the startups have figured out how to be more efficient.

"From an operations perspective, they may use their dispatch much more heavily and get more value out of their manpower, and hence are able to pay higher... They enjoy more scale and have more efficient routing of riders," he said.

Another possibility is that the market was not very competitive for a long time, keeping traditional delivery persons' wages stagnant.

A less-flattering possibility Assoc Prof Theseira raised is that the high earnings of on-demand delivery persons are supported by the abundance of venture capital in the industry, fuelled by a willingness to burn cash.

Which of these might be the key factor? It may become clear only with time. But for now, on-demand delivery startups maintain that their labour costs are sustainable because of efficient deployment.

The industry is awash in venture money, foodpanda's Mr Andreani conceded, but he said foodpanda has made sure to grow its utilisation rate - the number of orders per rider per hour - concurrently with fleet growth to reduce the cost per order. The startup uses a proprietary algorithm, Hurrier, to optimise deployment.

Similarly, Deliveroo taps its predictive algorithm FRANK to manage customers, riders and restaurants. "This combination of recruitment, technology and processes helps us keep the right balance between number of riders and order demand, which is important to ensure high service levels, rider earnings and satisfaction," its spokesman said.

Ultimately, optimal deployment will be the decisive factor to win market share, said Sharad Mishra, Deloitte South-east Asia's Future Of Mobility leader. "Having flexible working hours is definitely a big plus point ... Transportation cost is another important factor; if that can be brought down, it will be a good motivator."

"It would be more attractive to offer flexible benefits or benefit allowance - a system under which riders can claim or spend on their individual needs, spanning health, family and lifestyle. That said, service providers should provide baseline benefits, particularly insurance benefits for a workforce constantly on the road."

The industry may not be at boiling point yet, but when push comes to shove, both deep pockets and logistics know-how will matter equally to win the rider war, said foodpanda's Mr Andreani.

"We can absorb the craziness of the market, simply because we have good fundamentals and a high utilisation rate. It's easy to be crazy, but it's very hard to be crazy while being efficient."

DBS on Thursday introduced what it says is Singapore's first automated supplier payments solution for the construction sector, developed by local...

Construction firms tell of the delays and triumphs in managing workers

THE Building and Construction Authority (BCA) on Wednesday announced measures to hasten the restart of on-site construction work, in a bid to end...

Deputy Prime Minister Heng Swee Keat has assured business and union leaders that workers and companies will continue to get support as the...